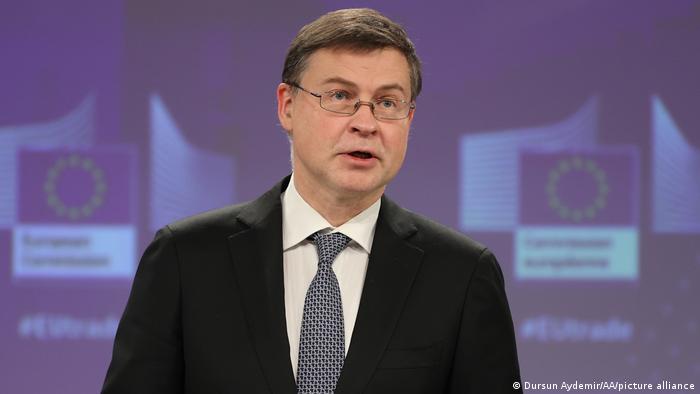 The European Union on Thursday announced it had lodged a complaint with the World Trade Organization (WTO) over China's behavior toward EU member state Lithuania, a move Beijing has dismissed as "groundless and inconsistent."

"Launching a WTO case is not a step we take lightly," said EU Commissioner for Trade Valdis Dombrovskis. "However, after repeated failed attempts to resolve the issue bilaterally, we see no other way forward than to request WTO dispute settlement consultations with China."

At issue is Lithuania's claim of Chinese strong-arming over Vilnius' decision last July to allow representatives from Taiwan — which China regards as a rebellious territory belonging to mainland China rather than a self-ruled democratic state — to open a diplomatic presence in the Baltic capital.

The move, by one of the EU's smallest countries, incensed China, provoking Beijing to react in hopes of forcing Lithuania to change its stance.

The European Commission, which handles trade policy for the EU's 27 member states and leads on conflicts at the WTO in Geneva, Switzerland, said China's moves included "a refusal to clear Lithuanian goods through customs, rejection of import applications from Lithuania, and pressuring EU companies operating out of other EU member states to remove Lithuanian inputs from their supply chains."

China warns EU to be wary of Lithuania

Trade Commissioner Dombrovskis said the EU considers China a "vital partner," noting, "we value this relationship." Still, he said, "our relationship requires mutual respect," adding, "the EU is determined to swiftly work as one against measures that threaten the integrity of our internal market."

Such threatening measures include pressuring other European companies — like German automobile parts manufacturer Continental — to drop Lithuanian partners from their supply chains.

Beijing, meanwhile, has scoffed at accusations of economic coercion. "The issue between China and Lithuania is a political one, not an economic one," said Chinese Foreign Ministry spokesman Zhao Lijian.

Zhao told reporters in Beijing that China had obeyed WTO rules, warning, "We would like to remind the EU to be wary of Lithuania's attempts to torpedo China-EU relations."

Despite the trove of evidence the EU has gathered to document Chinese restrictions, Dombrovskis said the bloc would continue to pursue diplomatic solutions to the feud. He also made clear that he had raised the issue with Chinese counterparts in recent weeks.

The EU has pursued friendlier ties with China for years, but issues such as Beijing's mistreatment of Muslim minority Uyghur in China's western Xinjiang region, its crackdown on pro-democracy activists in Hong Kong and its military provocations in the South China Sea have hampered relations.

With deteriorating relations front of mind, the EU is now mulling draft regulation that would give Brussels new powers to quickly retaliate against foreign governments seeking to undermine the European economy and businesses.