The EU has targeted individuals in Syria and Russia with links to chemical weapons attacks. The bloc has been discussing the new sanctions regime since late last year, prompted by the Skripal poisoning in the UK. 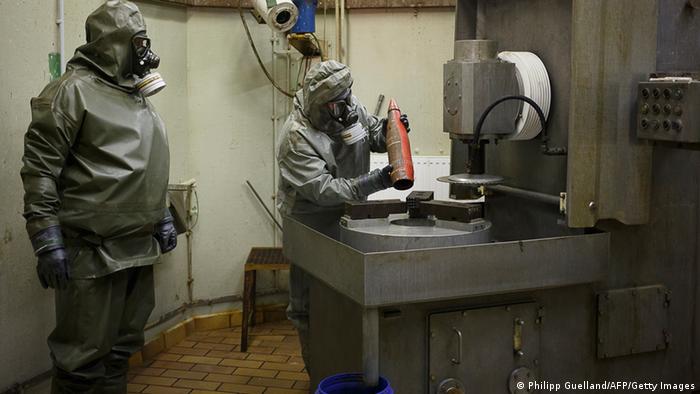 Moscow has been accused by European governments of being involved in the nerve agent attack on the former Russian double agent in the British city of Salisbury. The Russian government has repeatedly denied the charge.

But the incident caused ripples across the EU and in October 2018, it led the bloc to draft the new sanctions package to target people and entities involved in chemical attacks.

The EU travel bans and asset freezes target "the two GRU [Russia's intelligence agency] officials ... responsible for possession, transport and use in Salisbury (UK) of a toxic nerve agent," as well as the head and deputy head of the organization, EU foreign ministers wrote in a statement.

Russia dismissed the EU plan, viewing it as a negative development and saying that it changed nothing.

Kremlin spokesman Dmitry Peskov told reporters that Britain had still not handed over the evidence it had gathered against them, reinforcing that Moscow's involvement was still unproven.

The sanctions regime also includes punishment for the atrocities committed in Syria in April of 2018. At least 40 people were killed in a chemical attack on the city of Douma, which was under rebel control at the time.

Under the sanctions policy, the EU imposed restrictive measures on a Syrian entity responsible for the development and production of chemical weapons and five Syrian officials "directly involved" in its activities. The bloc has already sanctioned a list of 259 Syrians for their alleged role in the country's civil war.

Western nations have also accused the Syrian government of being involved in the chemical weapons attacks — allegations Damascus has denied.

Monday's foreign ministers meeting in Brussels, will also deal with other topics such as Brexit, disinformation and the upcoming EU elections, the disputed results of presidential elections in Congo and the crisis in Venezuela, among others.

What traces of chemical weapons could OPCW investigators still find in Syria?

As OPCW wait to start a fact-finding mission in Douma, will there still be enough evidence to gather? DW spoke with a toxicology expert about what inspectors will be looking for — and what chemicals may have been used. (18.04.2018)