The European Commission said it "cannot negotiate forever" and plans fine social media companies that do not comply with stricter consumer laws. Facebook and Twitter have until the end of 2018 before sanctions kick in. 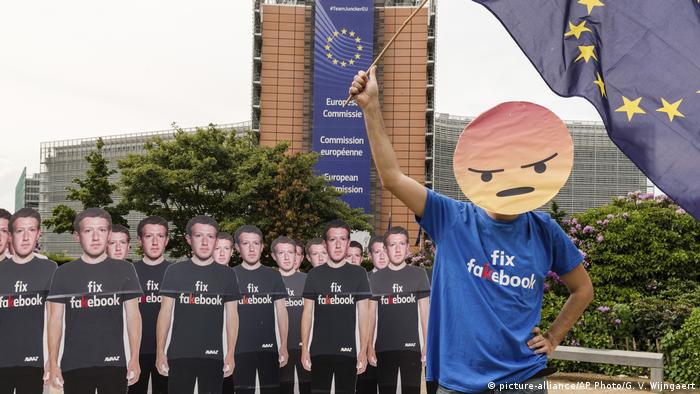 The EU demanded on Thursday that social networks Facebook and Twitter update their "misleading" consumer terms in accordance with the bloc's rules by the end of the year. Failure to do so would result in financial penalties for the social media giant, EU Justice Commissioner Vera Jourova said.

"My patience has reached its limit," Jourova added. "While Facebook assured me that they would finally adapt any remaining misleading terms of services by December, this has been ongoing for too long."

She said the EU "cannot negotiate forever, we need to see the results."

"It is now time for action and no more promises," Jourova said. She said she planned to call on all consumer protection authorities across the 28-member block to act fast and apply sanctions to Facebook and Twitter, if they failed to comply.

Read more: New EU copyright law: Will upload filters destroy the internet as we know it?

"We want Facebook to be absolutely clear to its users about how their service operates and makes money," Jourova said, adding that she will be expecting the company's proposed changes by mid-October so they can go into effect by December.

In March 2017, Facebook and other social media giants told EU authorities that they would change their terms and conditions, which the bloc had requested seven months ago. But the European Commission said that progress on the matter with Facebook had been "very limited."

On the other hand, the Commission highlighted the recent compliance of shared-housing application Airbnb. Jourvoa said the property rental website had agreed to changes she demanded, such as providing consumers with the full price of bookings on all its EU language sites, including extra fees such as service and cleaning charges.

Airbnb also committed to distinguishing offers from private hosts and professionals, a difference that affects the level of consumer protection available.

The Commission said it wants Facebook to give its 380 million EU users more information about how their data is used and how it works with third-party makers of apps, games and quizzes. But currently, the social network's new terms of services "contain a misleading presentation of the main characteristics of Facebook's services," the Commission said.

In particular, new terms introduced in April only tell consumers that Facebook uses their data and content to improve their overall experience, omitting that the data can also be used for commercial purposes.

The US social media giant defended itself by arguing that the new terms are "much clearer on what is and what isn't allowed on Facebook and on the options people have."

"We updated Facebook's terms of service in May and included the vast majority of changes the Consumer Protection Cooperation Network and the European Commission had proposed at that point," the company said in a statement.

The European Commission has been taking action on what it sees as risks for European consumers using the services of Facebook, Twitter, Google, Amazon, Uber and others. The bloc's has been at the forefront of a regulatory crackdown on US tech giants, having also slapped huge anti-trust fines on Google this year.

Facebook has told the EU that 2.7 million EU citizens are among the 87 million people who may have had their data breached. EU Justice Commissioner Vera Jourova is to call Facebook's Sheryl Sandberg "early next week." (06.04.2018)