European Union foreign ministers meeting in Brussels have agreed to impose new sanctions over Russia's alleged involvement in the Ukraine conflict. This will see an already existing "blacklist" of individuals expanded. 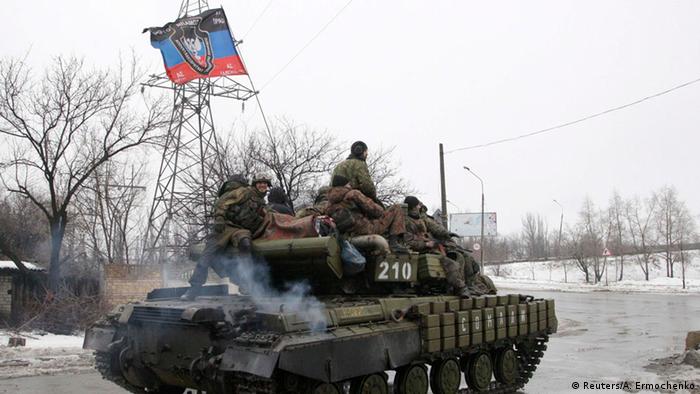 The European Union's foreign policy coordinator, Federica Mogherini, told reporters in Brussels on Thursday that she and the bloc's 28 foreign ministers had agreed to draw up a new list of people to be targeted by sanctions within the next week. She said the final decision to implement the sanctions, which amount to asset freezes and a ban on those listed entering the EU, would be taken at a further meeting of the foreign ministers, on February 9.

She said they had also agreed to do preparatory work for other possible future "appropriate action."

German Foreign Minister Frank-Walter Steinmeier also noted that more action, beyond extending the "blacklist" of Russian and Ukrainian citizens accused of supporting pro-Russia rebels in eastern Ukraine, could be possible in the future.

"If there were large military offensives, for example with widespread assaults on Mariupol, a clear reaction would be needed," Steinmeier said, referring to the port city where 30 civilians were killed and dozens of others wounded in rocket attacks on Saturday.

EU countries have, however, ruled out a military response to the conflict.

The EU imposed the first visa bans and asset freezes against officials it saw as involved in Russia's annexation of Ukraine's Crimean Peninsula.

Dutch Foreign Minister Bert Koenders said the decision on Thursday to extend that list was unanimous and sent "a strong signal toward Russia."

Already struggling under the weight of the sanctions, Russia's economy and the ruble have also been hit by the sudden implosion of oil prices around the world. Russia was downgraded by US ratings agency Standard & Poor's on Monday to BB+, its highest rating considered non-investment grade, or "junk" status.

There had been concern earlier in the day that Greece's new foreign minister, Nikos Kotzias, might oppose the measures, which require unanimous approval. Earlier in the week, Syriza - the dominant force in Athens' new far-left and far-right coalition - complained that the EU had announced plans to consider fresh sanctions against Russia without first consulting Greece's incoming government.

The Belarusian Foreign Ministry announced on Thursday that it would host representatives of the Ukrainian and Russian governments, as well as the Organization for Security and Cooperation in Europe (OSCE) in a new round of talks on Friday aimed at ending the bloodshed in Ukraine.

"The contact group on Ukraine has informed the Belarusian side of its intention to hold its next meeting in Minsk on January 30," a statement released by the foreign ministry said.

It wasn't immediately clear whether representatives of the pro-Russian separatists fighting against Kyiv's forces in eastern Ukraine would take part.

Russia has been heading towards a heavy recession for a long time. Now the EU is discussing new sanctions against Moscow. What part do sanctions from the West actually play in this crisis? (30.01.2015)

Russia warns Bosnia and Herzegovina against sending ammunition to Ukraine

Moscow has condemned the plans of Sarajevo to ship small arms ammunition to Ukraine, warning that it would lead to "senseless" deaths. Two Bosnian companies have already agreed on the sale worth millions of dollars. (29.01.2015)

EU sanctions against Russia are to remain in place until December and expand in scope, according to a draft statement from EU foreign ministers obtained by reporters. This comes as violence in eastern Ukraine increases. (28.01.2015)