On the day the EU could approve the AstraZeneca vaccine, Ursula von der Leyen has called for answers over a delay in the amount of shots the bloc receives from British-Swedish pharmaceutical giant. 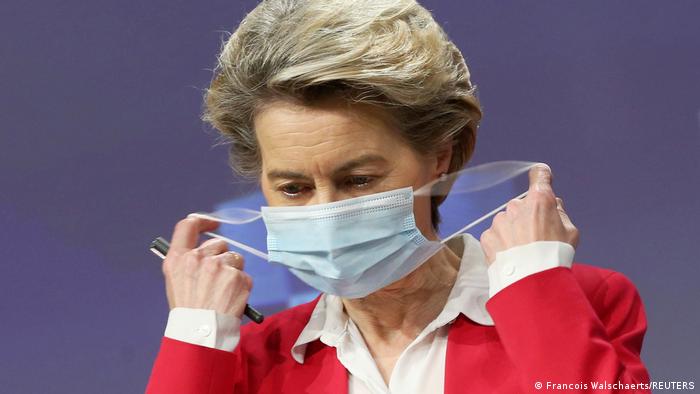 European Commission President Ursula von der Leyen on Friday said Brussels wanted a "plausible explanation" from AstraZeneca about an expected delay to deliveries of its vaccine.

Von der Leyen stressed that the bloc's contract with the British-Swedish pharmaceutical giant for its COVID-19 vaccine contained binding orders.

The EU chief said it was up to the company to determine how the jab, developed by Oxford University, would be delivered. However, she told German public broadcaster Deutschlandfunk that she wanted transparency and reassurance about when they would arrive.

The European Commission on Friday published the terms and conditions of the contract.

What did the European Commission boss say?

Von der Leyen said she was satisfied with the vaccine contracts that the EU had made with AstraZeneca and other firms, but that assurances were needed.

"We want from AstraZeneca, as with other companies, that the delivery agreement is also fulfilled," said von der Leyen. "That is exactly the point we are discussing with the company. We want transparency. We want certainty of planning."

The European Commission chief disputed that the company had only given a "best effort" promise to deliver the vaccine on time and in the correct amount.

"'Best effort,' as far as I am aware, applied to whether they could develop a vaccine," said von der Leyen. "This period is now behind us. The vaccine is here,"

"With the development of a vaccine that is effective and safe, there were then quite clear delivery amounts."

What is the dispute between the EU and AstraZeneca?

The Amsterdam-based European Medicines Agency is on Friday due to announce its decision on approval of the Oxford-AstraZeneca coronavirus shot.

On Wednesday, the EU aired its frustrations with AstraZeneca, suggesting the pharmaceutical giant was reneging on its agreement.

Germany's vaccination process was dealt a blow last week when AstraZeneca unexpectedly announced cuts in supplies to the EU, citing production problems at a Belgian factory.

That triggered a furious response from the bloc, with an estimated 60% cut in deliveries down to 31 million doses in the period to the end of March.

The news was a major blow for the EU's 27 member states, which are already lagging vaccination campaigns in Israel, Britain and the United States. The company on Friday said it could offer a further 8 million doses to the EU, with the bloc saying this still fell well short of the promised amount.

In a separate twist, Germany's vaccine commission on Thursday said it could not recommend the use of AstraZeneca's coronavirus vaccine for over-65s.

Germany under pressure over vaccine rollout

Germany admitted this week that it faces a shortfall of vaccines that could continue until April.

German Health Minister Jens Spahn said there would be a meeting on Monday between Chancellor Angela Merkel, the nation's 16 state premiers, and senior figures within the pharmaceutical industry.

Spahn had called for such a summit because the government is "working on the assumption of at least 10 more "hard weeksdue to the vaccine shortage," he wrote on Twitter.