Poland's ruling against the primacy of EU law has sparked anger among some of the bloc's member states. Poland's prime minister has denied the possibility of a "Polexit." 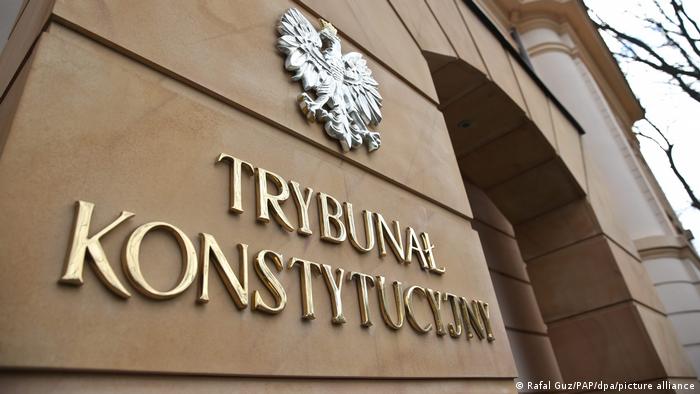 Poland's Constitutional Tribunal ruled against the primacy of EU law

The European Commission on Friday said it would "use all powers" under its charter to ensure respect of EU law.

On Thursday, Poland's top court said that Polish laws can take precedence over laws coming from Brussels, further deepening a rift with the EU.

"Our utmost priority is to ensure that the rights of Polish citizens are protected and that Polish citizens enjoy the benefits granted by membership of the European Union, just like all citizens of our Union," the Commission chief Ursula von der Leyen said.

"Moreover, EU citizens as well as companies doing business in Poland need the legal certainty that EU rules, including rulings of the European Court of Justice, are fully applied in Poland."

What did member states say?

Members of the European Union reacted with outrage on Friday to Poland's court ruling.

German Foreign Minister Heiko Maas told reporters that Poland must respect European law if it wants to remain part of the group.

"If a country decides politically to be part of the EU, then it must ensure that the agreed rules are fully and completely implemented," Maas said.

Vice President of the European Parliament Katarina Barley told DW that the decision could lead to a halt of EU funding to Poland, including suspending the pandemic recovery fund.

The Constitutional Tribunal's ruling "forces the [European] Commission to really take concrete action, and this action has to be and will be financial action because there are measures in place that the Commission can take now."

In a TV interview, France's Europe Minister Clement Beaune called the decision "an attack on the EU" and said it could be "a de facto exit" of the country from the bloc.

Jean Asselborn, the foreign minister of Luxembourg, said that "the development in Poland is very, very concerning," and warned that Warsaw was "playing with fire."

EU top diplomat Josep Borrell said that the primacy of European rule of law was one of the "pillars" that held the union together.

Later on Friday, the foreign ministries of France and Germany said Poland had a moral obligation to "unconditionally" abide by EU rules.

Polish Prime Minister Mateusz Morawiecki meanwhile said that his country had no intention of withdrawing from the European Union.

"Poland's place is and will be in the European family of nations," Morawiecki wrote on Facebook, adding that joining the bloc had been one of the best things to happen to Poland in recent decades.

However, he said, "we have the same rights as other countries. We want these rights to be respected. We are not an uninvited guest in the European Union. And that's why we don't agree to be treated as a second-class country."

Katarina Barley told DW the EU is pro-Polish people, but that it is "necessary for us to take a stance towards their government" following the court's ruling.

What was the court case in Poland?

For years, the EU and Poland have been battling over controversial changes Warsaw has made to media laws and the judiciary which critics decry as power grabs from the ruling Law and Justice (PiS) party.

Brussels has moved to sanction Poland more than once over what it sees as a direct political influence on the courts.

Reacting to this, Poland's Constitutional Tribunal ruled that the EU could not "act beyond the scope of their competences" by interfering with Poland's judiciary.

"The attempt by the European Court of Justice to involve itself with Polish legal mechanisms violates ... the rules that give priority to the constitution and rules that respect sovereignty amid the process of European integration," the panel of judges wrote.

Poland set to back down in EU legal row

Poland will water down its controversial justice reform following years of EU pressure, according to Jaroslaw Kaczynski. The bloc's top court has said Warsaw must suspend a system for disciplining judges.