Leaders have agreed to pass the new budget and coronavirus recovery fund, including holdouts Hungary and Poland. The two countries had blocked the passage over wording that tied the funds to upholding the rule of law. 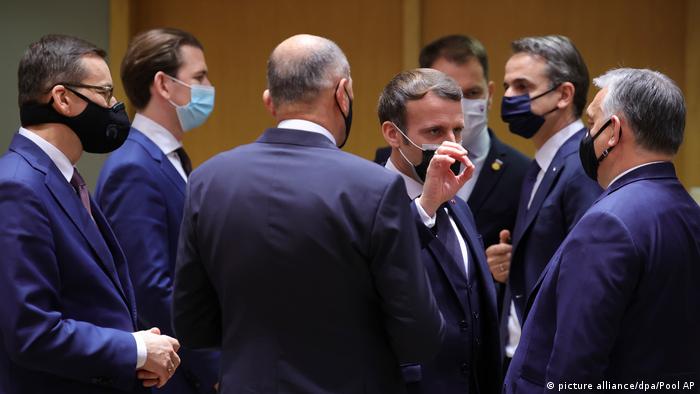 Hungary and Poland had blockaded the budget for several weeks

European Union leaders on Thursday reached agreement on a long-term budget and coronavirus recovery package, after weeks of resistance from Poland and Hungary, according to EU Council President Charles Michel.

The two countries had blocked the €1.1 trillion ($1.3 trillion) seven-year budget and €750 billion recovery package  over stipulations that tie the funds to upholding the rule of law.

"Now we can start with the implementation and build back our economies. Our landmark recovery package will drive forward our green and digital transitions,'' Michel said in a tweet.

No details of the agreement were immediately available, however ahead of the summit, EU diplomats and officials said there would likely be a declaration that the rule of law mechanism would only be used after a ruling from the European Court of Justice — a process that could take up to two years.

Germany, current holder of the rotating European Council presidency, said it had brought Poland and Hungary on board.

"Germany has worked hard to bridge the differences and find solutions for the concerns of Poland and Hungary while at the same time upholding the rule of law mechanism as agreed with the European Parliament," Chancellor Angela Merkel said on arrival to the summit.

The EU has repeatedly accused Poland and Hungary of undermining judicial independence and media freedoms.

Ahead of the summit, Polish Prime Minister Mateusz Morawiecki said the rules could be used to target other member states in future.

"We have to avoid any arbitrary and politically motivated decisions,'' he said. "Today, we fear that we might be attacked in [an] unjustified way, but of course in the future [it can be] any country."

Hungarian Prime Minister Viktor Orban said that they were fighting for "a victory for common sense."

"It is obvious that when our nations and so many millions of people are in real need because of (the) pandemic and the economic consequences of that, we have to behave reasonably,'' said Orban.

Both countries, accused by many European partners of sliding towards authoritarianism, are major net recipients of EU funds, whereas wealthier EU countries pay more into the budget than they receive.

Katarina Barley, Vice President of the European Parliament, blamed Orban for the watering down of the rule of law mechanism, telling DW he was "trying to fill his pockets and pockets of his clan [for] as long as possible."

She added that the coronavirus aid package can be used to pressure both countries to return to European values.

"It's not that one, or another time, you violate European law — that can happen, and we have the European Court of Justice to correct that. This is the systemic and the fundamental violation of the rule of law, of European values. And that has been done in bad faith in both countries."

Is a EU budget compromise in sight?