Opinion: Hungary and Poland win at Merkel′s last EU summit | Europe | News and current affairs from around the continent | DW | 11.12.2020 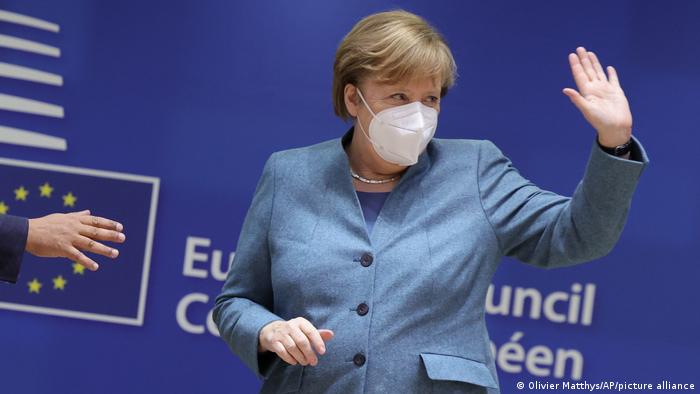 It was predictable that Chancellor Angela Merkel would want to prevent the EU's unity from being undermined under her watch during the last weeks of what has been a rough turn at the presidency of the Council of the European Union for Germany. Merkel's first instinct is usually to keep the flock together.

And she managed the trick this time with a typical EU-style compromise: one that is not really good but not really bad, either. The result is the delayed implementation of the European Union's Rule of Law Mechanism, which had been the product of years of bitter debate and was meant to finally be an effective weapon against the anti-democratic tendencies of the governments in Poland and Hungary.

In summer, the Netherlands and other member states had agreed to take on joint debt to finance the coronavirus fund under the condition that governments such as those in Hungary and Poland could no longer use the European Union as a self-service store. For many years, the citizens of other EU member states had wondered why their taxes should be used to finance the corrupt clique surrounding Hungarian Prime Minister Victor Orban.

But even the governments of EU member states that had pushed for the Rule of Law Mechanism have now voted for the compromise because, without the budget, the European Union would have been unable to take the action needed during the coronavirus pandemic. With their veto threats, the autocrats in Hungary and Poland succeeded in putting a brake to the Rule of Law mechanism, which will continue to guarantee their impunity.

It was always clear that the only way to make any impression on Orban and his kindred spirits in Poland's ruling Law and Justice (PiS) party was to hit them in their pocketbooks. The European Court of Justice has handed down a series of verdicts against both governments, but they are simply ignored. The sole method of constraining them is to take away their EU subsidies.

Why do we have to put up with someone like Orban, with his lying propaganda, insults and anti-Semitic attacks? He and the ever more autocratic Polish government have taken the European Union to its political limits.

Almost every country has problems in the transitional phase to democracy; corruption tends to be widespread, and the fight for an independent judiciary takes time to win. But Poland and Hungary are taking quite another path altogether: Their governments are on the way to becoming autocratic regimes.

They are getting rid of the free press and an independent justice system while systematically curtailing civil rights. In Poland, the government is targeting women and stirring up hostility toward LGBTQ+ communities. There is resistance — but the dramatic example of Belarus has shown us how difficult it is to hold protests when police have been ordered to disperse them by force.

The European Union cannot put up with such governments. It cannot continue to look the other way, or it will erode its common basis. Septicemia starts on one side and spreads to the remaining limbs. Liberal democracies are having a hard enough time of it anyway; we can't let them be undermined from within.

At some stage, in about two years, the Rule of Law Mechanism might make it possible to indeed take money away from Orban and Poland's PiS government. But the European Union could already have used long-existing mechanisms and threatened to take away their right to vote. However, cowardliness and a kind of wrongly understood EU esprit de corps among government leaders prevented this from happening.

The governments of Hungary and Poland have now gained time to continue with their dismantling of democracy. They will regularly be reprimanded and sued, but that is water off a duck's back to them. As long as the European Union does not take serious action against them, Orban and Co. will go on unperturbed. And, in the end, the political debacle will be one that can barely be reined in. The compromise on the EU budget might have been necessary, but, unfortunately, it was a political mistake.

Leaders have agreed to pass the new budget and coronavirus recovery fund, including holdouts Hungary and Poland. The two countries had blocked the passage over wording that tied the funds to upholding the rule of law.