The EU's highest court may classify honey containing traces of genetically modified material as "food produced" from modified plants. Such a ruling may enable beekeepers with hives close to GM crops to seek damages. 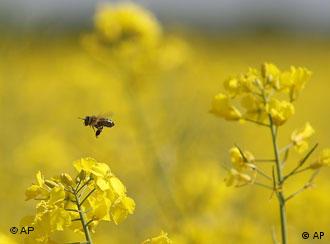 Beekeepers with hives close to fields of Monsanto genetically modified maize can't sell their honey in the European Union without regulatory approval, an adviser to the European Court of Justice has said.

The presence in honey "even of a minute quantity of pollen" from the maize is reason enough to restrict its sale, Advocate General Yves Bot told the court last week. 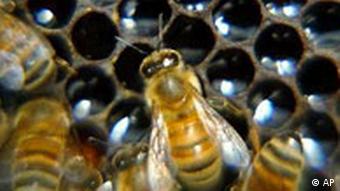 "Food containing material from a genetically modified plant, whether that material is included intentionally or not, must always be regarded as 'food produced' from modified plants," said Bot. Acting as an independent adviser to the court, he was tasked with suggesting a ruling, based on previous EU decisions. If the EU tribunal follows Bot's advice, which it is expected to do, the ruling could have consequences across the bloc.

This would be a huge success for "anyone wanting to prevent food and animal feed from being more and more contaminated with genetically modified material," said Achim Willand, a lawyer representing food producers. "Beekeepers are especially susceptible because bees collect the pollen of GM plants within a radius of three to five kilometers," he told Deutsche Welle.

Monsanto's genetically modified corn type MON 810 has not been authorized for sale on the European food market. If new regulations are established, making it impossible for beekeepers to sell their product because it has been contaminated by pollen from MON 810 crops, the beekeepers may be able to claim damages from Monsanto. 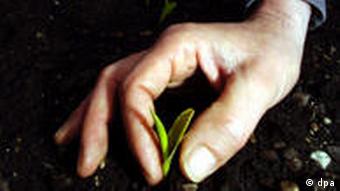 Monsanto tested its MON 810 maize in various locations across Germany

"Yves Bot didn't use the word, but the opinion basically translates into a zero tolerance policy," said Thomas Radetzki, an advocate for German beekeepers against genetic engineering in agriculture. "It would mean that any produce with even the slightest trace of genetically modified crop would become a GM food product, with all the consequences."

Beekeeper Karl-Heinz Bablok, from Kaisheim near Augsburg in Southern Germany, originally brought the case to court. His hives were two kilometers away from fields where research was being conducted with Monsanto's MON 810 maize. He went to court trying to get the research stopped or get protection for his produce. Researchers argued that the bees weren’t interested in pollen from maize.

In an attempt to prove the researchers wrong, Bablok put his hives 500 meters away from the maize fields. He had to throw away the honey his bees produced, because he found it was contaminated with traces of GM pollen. 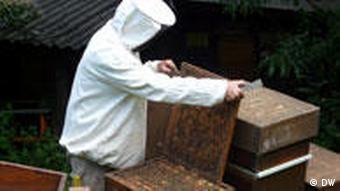 The new rule wouldn't just affect beekeepers, it would have implications on granting GM plant growth permissions in general

Thomas Radetzki of the beekeepers' action group said beekeepers who have hives close to GM crop fields have not had enough protection, despite the existence of protective laws.

Currently, Monsanto is banned from testing its maize in Germany. Meanwhile, the beekeepers case is being watched closely by the agricultural sector. "If we're successful, others may follow, and then the matter may be brought to other national courts too," said Radetzki.

No winner declared yet

Achim Willand, the lawyer representing food producers, said the Advocate General's suggested ruling could have implications for anyone seeking permission to grow genetically modified plants in the EU.

But Thomas Radetzki said, while opponents of GM crops may be pleased at the moment, the case hadn’t been won yet. Advocate General Yves Bot based his suggested ruling on laws which are in place right now. Radetzki warned that, even if the EU tribunal were to follow Bot's advice, "the EU Commission can always change its laws. Then we'd have to start from scratch."

US biotech giant Monsanto is suing Germany over its decision to ban genetically modified corn, saying it is arbitrary and goes against EU regulations. (22.04.2009)

The European Commission has been debating the French and Greek refusal to accept genetically modified maize from the US firm Monsanto even though it has been given the green light to be grown in Europe. (16.02.2009)