Brussels and Ankara are trading recriminations in the wake of a diplomatic faux pas that observers say smacked of Turkish chauvinism. Turkey has now claimed that it was following EU instructions. 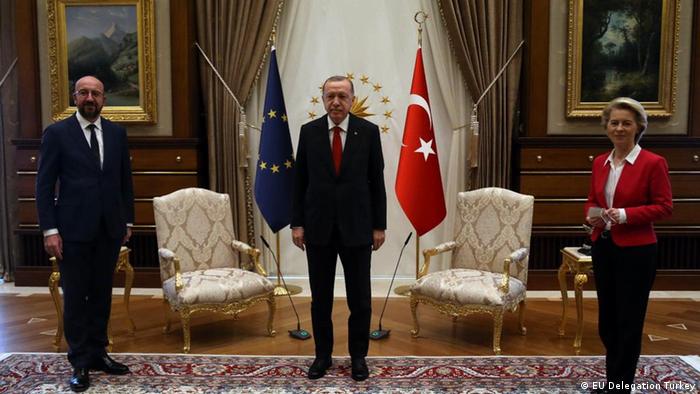 A day after public outcry at European Commission President Ursula van der Leyen being snubbed during an official meeting with European Council President Charles Michel and Turkish President Recep Tayyip Erdogan in Ankara, politicians in Brussels and the Turkish capital were blaming one another for the embarrassing situation.

It occurred on Tuesday (April 6), during the first meeting between EU and Turkish leaders in a year. Relations during that time have been marked by rising tensions over a number of issues, not least, Turkish oil and gas exploration in waters off the coast of Cyprus — which has sparked calls for sanctions against Ankara.

When Erdogan led Michel and von der Leyen into the large room where the meeting was to take place, he and Michel chatted as they sauntered to two seats situated beneath EU and Turkish flags, cutting off von der Leyen and leaving her to take a seat on a sofa opposite Turkey's Foreign Minister Mevlut Cavusoglu — at which point she demonstratively cleared her throat and gestured questioningly to Erdogan.

Why is the von der Leyen snub news?

When the images went viral, the recriminations began, with many EU observers crying chauvinism and pointing out the cynicism on display as Erdogan — who withdrew Turkey from the Istanbul Convention combating violence against women — seemingly slighted a female leader of equal diplomatic rank as himself and Michel.

Foreign Minister Cavusoglu addressed the topic on Thursday, seeking to shift blame on the EU by noting, "The protocol applied during meetings is in line with international protocol rules, as well as the world-renowned Turkish hospitality traditions.''

Cavusoglu said he felt compelled to publicly call out Brussels because of "extremely unfair" criticism of Turkey from those at "the highest levels of the EU."

Yes, but why didn't the EU's Charles Michel object?

European Council President Charles Michael, too, broke a day of silence to release an awkward statement on Facebook to defend his own behavior as footage appeared to show him blithely take his seat and leave von der Leyen in the lurch.

The Belgian politician claimed the faux pas was the result of Turkey's "strict interpretation'' of protocol rules. Michel wrote that although he may have appeared "oblivious" to the situation he was anything but, defending his behavior and apparent lack of manners by writing, "while realizing the regrettable nature of the situation, we decided not to make matters worse by creating a scene.''

Michel also said he regretted "the differentiated, even diminished, treatment of the president of the European Commission."

For her part, Von der Leyen said the situation had "sharpened her focus" when she spoke at the press conference that followed the meeting, emphasizing that she and President Erdogan had engaged in a long discussion about women's rights.

EU Commission Spokesman Eric Mamer on Thursday refrained from direct comment on Turkish claims, seeking to play down the issue: "If you look at the president's statements, what she put on her Twitter account, etc., you will see that there is no mention of this event," Mamer said. "Let's not exaggerate the importance that we attach to it."

Why are Brussels politicians so upset with Turkey?

The incident has not gone down well in Brussels, where the European Parliament's two largest blocs — the conservative European People's Party (EPP) and the center-left Socialists and Democrats (S&D) — have demanded a public debate on the situation in order to get to the bottom of it. The blocs hope to have Michel and von der Leyen testify by the end of April.

Manfred Weber, a German politician who leads the EPP in Brussels, said the EU diplomatic trip had been designed to, "send a message of conviction and unity when dealing with President Erdogan. Unfortunately, it led to a split after the EU missed its opportunity to stand together as required. We expect more from EU foreign policy."

Iratxe Garcia Perez, who leads the S&D in the European Parliament, tweeted: "First they withdraw from the Istanbul Convention and now they leave the President of European Commission without a seat in an official visit. Shameful."

In a tweet put out on Thursday, the Spanish politician wrote: "EU-Turkey relations are crucial. But #EU unity and respect for human rights, including women's rights, are also key."

The public debate both blocs are demanding will also seek to answer other, more substantive long-term issues. Conservatives in the EPP, for instance, say they are concerned that Michel and von der Leyen may have made concessions to Turkey on issues like guaranteed visa-free travel in the EU for Turkish citizens or expanding the customs union without having affected any change in Turkey's behavior in Cyprus, the Mediterranean or at the EU's external borders.

Italian Prime Minister Mario Draghi has perhaps used the most heated rhetoric amid the scandal, referring to Erdogan as a "dictator" on Thursday evening. He said he was "displeased" by Erdogan's treatment of von der Leyen.

"With these dictators, let's call them for what they are — who however are needed — one must be honest in expressing one's diverging ideas and views about society," Draghi told reporters, referring to Erdogan. "But one must also be prepared to cooperate with them in the interest of the country. The right balance is needed."

What is the state of EU-Turkish relations?

At issue is also the state of the so-called 2016 EU-Turkey refugee deal, which essentially sees EU cash payments to Ankara in exchange for Turkish help managing the EU's external borders and the return of refugees and migrants who have entered the EU via Turkey without having undergone a formal application process.

Turkish President Erdogan has repeatedly threatened to "open the gates" to the EU should Brussels fail to live up to its promises of accepting legitimate Syrian refugees now in Turkey, loosening visa restrictions for Turkish citizens traveling to the EU and continuing payments of roughly €6 billion ($7.14 billion).

The bloc is next expected to address its relations with Turkey at a European Council leaders' meeting on June 24-25.

Turkey has been a nominal EU accession candidate since 1987, however, talks have stalled or even regressed since 2016, with some EU member states, such as Austria, demanding negotiations be broken off for good, citing a lack of compatibility between Turkish and EU values.