Brussels has expressed dismay after European Commission President Ursula von der Leyen found herself without an equal place to sit at top-level talks in Turkey. 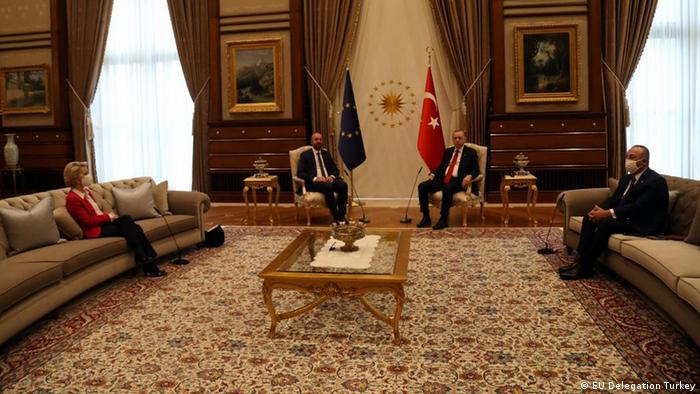 Ursula von der Leyen was seated away from her two male counterparts, opposite Turkey's foreign minister

The European Commission on Wednesday reproached Ankara after its chief Ursula von der Leyen found there was no chair for her as the Turkish president sat down to talk to her male colleague Charles Michel.

The incident was quickly dubbed "sofagate," with observers saying the Commission president had been a victim of sexism and treated like a second-rank official.

What happened at the meeting?

Footage showed Von der Leyen gesture in disbelief and utter a surprised "ähm" as Erdogan and Michel took the two center-stage seats that had been prepared.

The Commission head was instead forced to sit on an adjacent sofa, slightly further away from her male counterparts.

She was seated opposite the Turkish foreign minister, who would normally be considered below her in the protocol pecking order.

As president of the European Commission, von der Leyen is head of the EU executive, while, as European Council president, Charles Michel coordinates between the leaders of the EU member states, especially during summits. If anything, von der Leyen's post is considered the more senior and important.

Brussels expects both to be treated with the protocol that would be reserved for a head of government.

What did the Commission say?

"The president of the Commission was clearly surprised," said Commission spokesman, Eric Mamer.

"She chose to prioritize substance over questions of form or protocol, and that's certainly what European citizens would have expected of her."

"She does consider that these issues are important and need to be treated appropriately, which they clearly were not," Mamer said.

Mamer declined to comment on what he thought was behind the apparent snub. 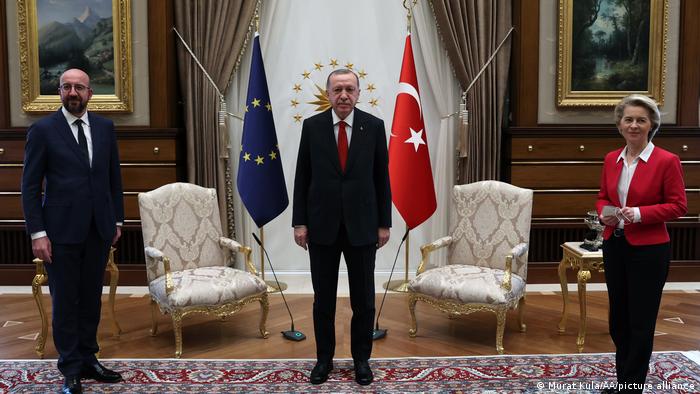 The three leaders had equal status for the photo op, but von der Leyen had to make do with the couch when they sat down

Tentative effort to repair ties, including on gender issues

The diplomatic upset came at a delicate moment as the EU and Turkey look to mend damaged relations that reached the latest in a series of low points last year.

Erdogan drew the EU's criticism ahead of the visit by announcing he was withdrawing Turkey from the international Istanbul Convention on preventing violence against women and children.

"This is about protecting women, and protecting children against violence, and this is clearly the wrong signal right now," von der Leyen said.

Speaking on Wednesday, Mamer said the seating issue for von der Leyen had "sharpened her focus on the issue."

"First they withdraw from the Istanbul Convention and now they leave the President of European Commission without a seat in an official visit. Shameful. #WomensRights," wrote Garcia Perez.

Meanwhile, Dutch MEP Sophie in 't Veld questioned why Michel was "silent" as his female colleague was left without a seat.