Estonia says Russia's ambassador has been summoned to the foreign ministry in Tallin to explain a brief airspace intrusion by a Russian spy plane. NATO says the plane was intercepted by alliance fighter jets. 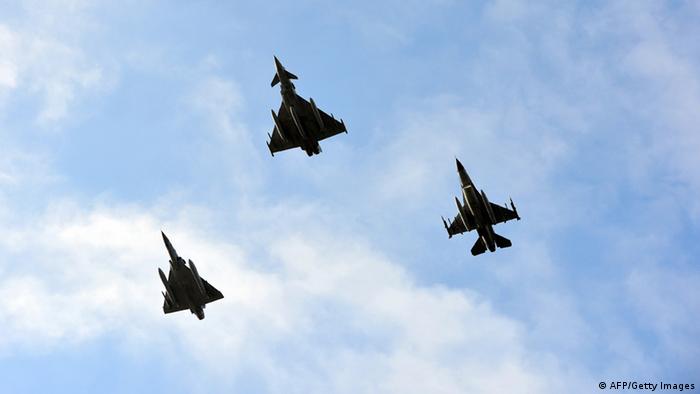 NATO said the airspace of its member Estonia was breached for about one minute during Tuesday's intrusion by a Russian Ilyushin-20 surveillance aircraft.

The reported incident coincides with lingering Russian-NATO tensions over Ukraine.

Recounting the incident late Wednesday, the Western alliance said from Brussels that the propeller plane had taken off from the Russian Baltic enclave of Kaliningrad on Tuesday.

It approached Denmark, prompting an interception by Danish F-16 fighter jets and then while flying north by jets from non-NATO member Sweden.

Nearly four hours later, it turned south and intruded for less than one minute into "NATO airspace" near Estonia's island of Saaremaa.

A NATO statement said this leg of the Ilyushin's flight "represented an incursion of about 600 meters (yards) into NATO airspace," it said.

Portuguese F-16s based in Lithuania then escorted the Russian plane away from Estonia.

On Monday, NATO pilots had intercepted a Russian aircraft over the Baltic Sea, but on that occasion there was no incursion, said an alliance spokesman.

Since last Friday, the Swedish navy has been combing Baltic Sea waters off Stockholm after reported sightings of a foreign submarine.

Two men, a lieutenant-colonel and lawyer, were indicted on charges of spying for Russia in Warsaw. The charges come at a time of increasing tension between the two nations stemming from Russia's annexation of Crimea. (17.10.2014)