The search continues for a mystery submarine sighted over the weekend in Swedish waters. Russia has denied involvement and accused the Dutch. The Dutch, too, say it wasn't theirs. The region remains on edge. 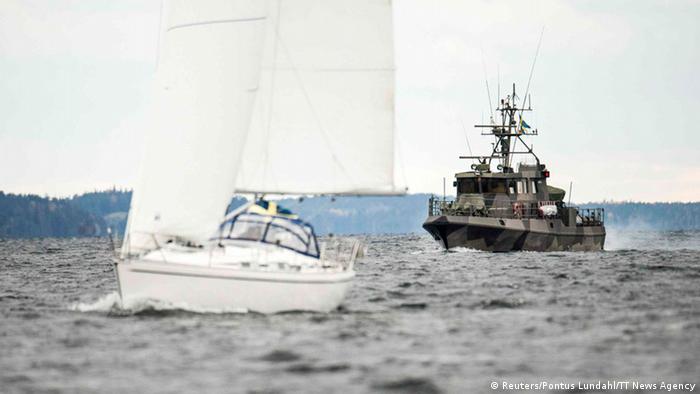 The Netherlands denied on Monday Russian claims that a mystery submarine, found in Swedish waters, could be Dutch.

A Russian defense ministry official suggested earlier on Monday that the unidentified vessel, sighted off Stockholm late Friday, could be the Dutch Bruinvis, which had taken part in exercises off the coast of Sweden last week.

"To remove tensions in the waters of the Baltic Sea and to save money of the Swedish taxpayers we would recommend [Sweden] to turn to the naval command of the Netherlands for an explanation," an unnamed official was quoted by Russian news agencies as saying. But the Dutch defense ministry said its submarine was no longer in the area when the mystery vessel was reportedly sighted.

"We participated in an exercise with Sweden with several ships, but it ended last week Thursday," Dutch defense ministry spokeswoman Marnoes Visser said. "The Bruinvis then departed for Estonia, where it has been at anchor in the Tallinn harbor."

Sweden's navy widened its search on Monday southwards to the open sea about 70 kilometers (44 miles) southeast of Stockholm, as Swedish Prime Minister Stefan Loefven said that further military exercises were being carried out in the Baltic Sea.

"There's an increase in military exercises from both the Russian and the NATO side," Loefven said, speaking at a press conference in Helsinki. "There's no reason for exaggerated concern, but obviously we are aware of what's happening in the Baltic Sea because it's our neighborhood."

Since the armed forces received a tip-off about a "man-made object" on Friday, more than 200 men, several stealth ships, minesweepers and helicopters have combed the sea around islands close to the Swedish capital.

"There is no submarine hunt underway, there is an ongoing intelligence gathering operation," Loefven said. On Sunday night, the Swedish armed forces released a photo taken the same day of what it believed was a "foreign vessel" near islands about 50 kilometers (30 miles) east the Swedish capital.

Speculation has been rife over the origin of the vessel, with a Swedish media report initially suggesting that it might be a Russian U-boat.

A number of Baltic Sea countries remain on edge, with Latvia's foreign minister calling the incident a potential "game changer" in the region.

As soon as it was reported on Friday, the search sent a chill through the Baltic Sea region, where Russian forces have been accused of a series of border violations on land, sea and air in recent months.