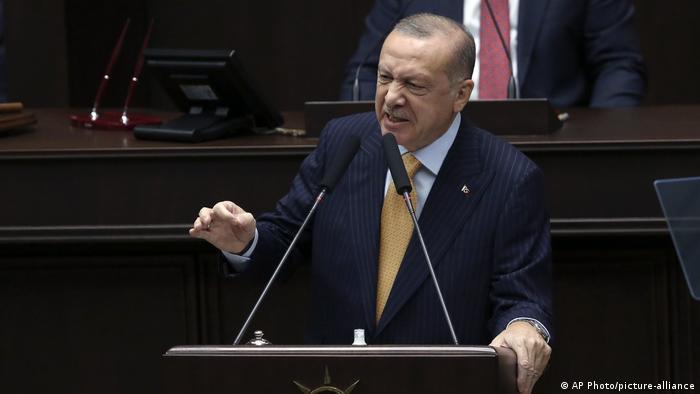 President Erdogan on Wednesday dismissed a Charlie Hebdo caricature depicting him apparently drinking alcohol and lifting the skirt of woman in a hijab as a "disgusting attack."

The magazine featured the cartoon of the president on its front page, with the words "Erdogan: He's very funny in private."

The Turkish president said he had no words for those at the magazine, which had previously caused anger throughout the Muslim world with its cartoons of the Prophet Muhammad.

"I don't need to say anything to those scoundrels who insult my beloved prophet on such a scale," said Erdogan.

The leader said he had not seen the magazine cover, but had been made aware of it.

"My sadness and anger is not because of this disgusting attack against me, but because the very same media is the source of impudence against our beloved prophet whom we hold so dear," he told members of his ruling Justice and Development Party, to a standing ovation.

The cartoon followed a diplomatic upset between France and Turkey in which Erdogan questioned Macron's mental health over his defense of the Charlie Hebdo images. France withdrew its ambassador to Ankara and the Turkish president called upon Turks to boycott French products.

Earlier on Wednesday, Turkey said it would take legal and diplomatic steps in response to the Erdogan cartoon. State news agency Anadolu reported that the chief public prosecutor in Ankara had launched an investigation into Charlie Hebdo's executives and that Erdogan's lawyers had filed a criminal complaint against the publication.

Turkish presidential communications director Fahrettin Altun had already slammed the Erdogan cartoon as "the product of a xenophobic, Islamophobic, and intolerant cultural environment the French leadership seems to want for their country."

"French President Macron's anti-Muslim agenda is bearing fruit! Charlie Hebdo just published a series of so-called cartoons full of despicable images purportedly of our president," Altun tweeted. "We condemn this most disgusting effort by this publication to spread its cultural racism and hatred."

The Muhammad images were thrown back into focus after the murder of teacher Samuel Paty, who had shown pupils cartoons of the Prophet Muhammad as part of a lesson on free speech. An 18-year-old man of Chechen origin who carried out the killing on October 16 was later shot dead by police.