Big companies including Coca-Cola and Danone have signed a new global commitment to tackle the plastic waste problem. Mere greenwashing, or can such pledges make a difference in the fight against plastic pollution? 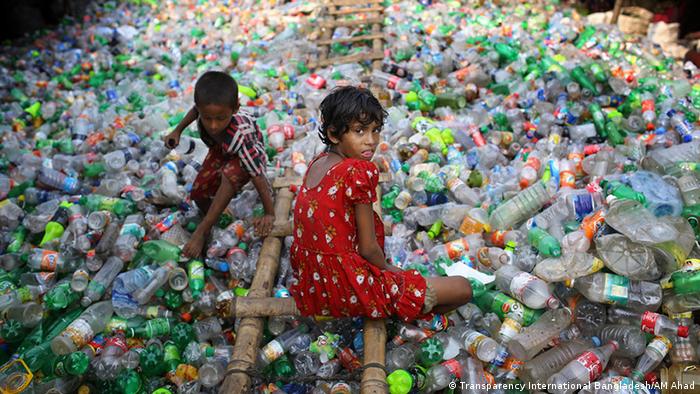 Plastic waste is in the spotlight right now — no doubt about that. The European Commission's recent decision to ban the most polluting items of single-use plastic captured significant attention.

But regardless of bans, plastic continues flowing into our oceans, polluting the planet at an alarming rate.

Meanwhile, the global community keeps working away at the problem — currently on the idyllic island of Bali, Indonesia, where the 5th Our Ocean Conference is being held (October 29-30).

These include large transnational corporations like Coca-Cola, Danone and Unilever. Such signatories are significant not only for their economic empires, but also because they are major contributors to global plastic pollution.

But do such pledges really amount to more than companies simply bragging about their efforts, or can they contribute to real action?

A year of promises

This has been a breakout year for action around plastic pollution.

China surprised the world with its ban on the import of plastic waste, which spawned further such moves by other countries.

In June 2018, five leading world nations agreed to a plastics charter at the G7 summit in Canada.

Trading plastic trash for a bus ticket in Indonesia

At the end of September, the United Nations Environment Program (UNEP) launched the Global Plastics Platform, a network to "encourage new commitments" and support countries and cities in the transition to a more circular economy.

This new international commitment, led by the Ellen MacArthur Foundation and UNEP, represents a further step.

Although it is a voluntary mechanism, the commitment sets targets such as ensuring "100 percent of plastic packaging can be easily and safely reused, recycled or composted by 2025."

Companies must also share their progress annually based on these objectives.

For Reinhard Schneider, CEO and owner of the German company Werner & Mertz — a manufacturer of cleaning and care products and one of the companies that signed the pledge — this commitment is outstanding.

A few years ago, companies may have taken on such pledges only to "green" their brand's image. But now that progress will be measured, that changes everything, Schneider said.

"It's not just enough to sign something and then be happy that you're on the good side," he told DW. "You really have to follow with some actions — and they will be made transparent."

Although such agreements surely are positive for a company's image, consumers now expect to see not just the signature, but also the change.

Living Planet: Plastic pollution and us

"Ever more consumers believe that it is worth investing at least a few cents in the circularity of a material that, otherwise, is becoming one of the most severe problems of environmental pollution," Schneider explained.

Such pledges also help to motivate workers, Schneider added. They feel their work has more meaning now, he said.

But Greenpeace says the targets for this commitment are not concrete enough.

"It's another opportunity for [companies] to indicate that they are taking action on a really important problem that a lot of people are paying attention to, and get positive publicity collectively in a safe space — while allowing them in large part to continue business as usual," Graham Forbes, global project leader with Greenpeace, told DW from Bali.

A recent Greenpeace report showed that 11 of the largest consumer goods companies, including Coca-Cola, PepsiCo and Nestlé, have no plans to decrease the total number of single use plastic that they're putting out into the world. 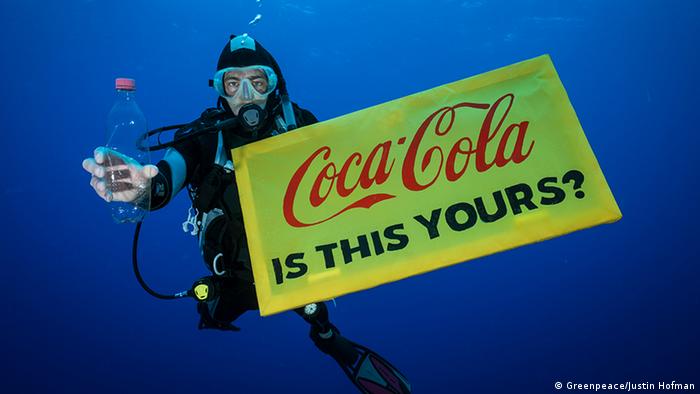 Greenpeace is campaigning to put pressure on big plastic producers

This despite another recent analysis by Greenpeace measuring actual plastic waste, which indicated that exactly these top-three companies are the largest sources of plastic pollution in the world.

On the contrary, all indications are that these companies plan to produce even more single-use plastic.

Nestlé maintained "our ambition is that 100 percent of our packaging will be reusable or recyclable by 2025." Unilever, for its part, says its waste from product disposal has been reduced almost 30 percent since 2010. As for Danone, nearly 80 percent of its plastic packaging is already reusable, recyclable or compostable, the company says.

Forbes says Greenpeace's intention is not to downplay the importance of the new commitment, nor the companies' efforts.

Yet "it's really important that governments and the public more broadly greet this with skepticism until we see real action," Forbes concluded.

Do you know plastic? A learning pack on plastic waste and its environmental impact