Emmanuel Macron visits Beirut: Can there be a ′French solution′ for Lebanon? | Middle East | News and analysis of events in the Arab world | DW | 08.08.2020 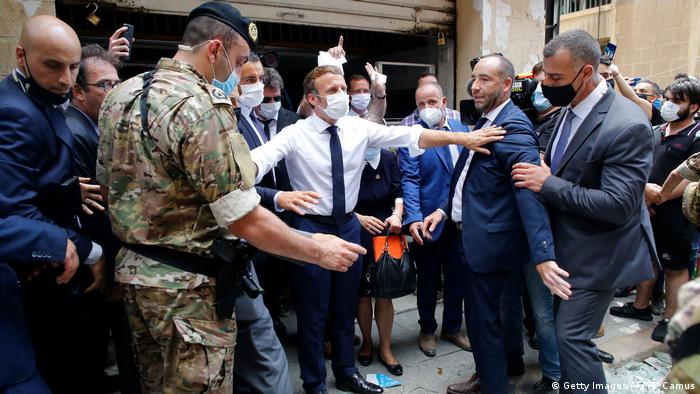 It was no coincidence that France's President Emmanuel Macron became the first western head of state to tour the remains of Beirut on Thursday (August 6). France's ties with Lebanon go back a long time. When the Ottoman Empire collapsed after World War I, France was handed a mandate to administer the infrastructure of Lebanon by the League of Nations (the predecessor to the United Nations).

Those ties remained in place after Lebanon's independence in 1943: To this day, parts of the country's elite speak French, and at many schools, French is spoken in class. A vast number of wealthy Lebanese own a second home in France, and Christian groups in Lebanon still see France as some kind of protecting power.

During his visit to Beirut, Macron promised direct aid, but he also called for a new political system. Does this amount to an improper interference by the former power? No, said Maximilian Felsch, a professor at Beirut's Haigazian University: "France is interested in maintaining good relations to francophone countries in the Middle East and in Africa."

If France was now prepared to help Lebanon in the current crisis, that would certainly meet with approval in the country, Felsch said. "I don't hear any voices at this point who interpret this as post-colonial interference." 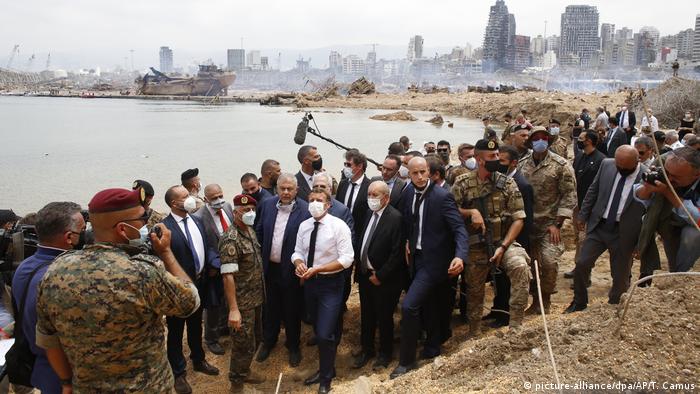 Macron called for a "new political order" for battered Lebanon

Macron himself told journalists after his visit that what was at stake was not a "French solution" but a "new political order" for the battered country.

The French president announced his country would organize an international donor conference for Lebanon. By this time, three airplanes carrying aid had already arrived from France, while a battleship with aid workers and medical supplies on board was also is on its way. Macron said he'd be back in Beirut on September 1 to review the situation.

The government of Lebanon was incompetent at all levels, said Felsch, whose flat in Beirut was severely damaged in Tuesday's devastating explosion. Affiliation with a religious group is the key criterion when it comes to filling political posts, and those in power are constantly fighting.

He added that the country was broke, the power and water supply as well as waste disposal were not functioning, while inflation was spiralling and the economy was in ruins. "In a situation like this, it's perfectly understandable that people hope to get rid of their political leadership. Anything is better than this. So I can understand that the majority of the Lebanese people hope that — if this was at all possible — some foreign power will take control of the country."

Middle East expert Elie Abouaoun, however, believes that it's unlikely that France could assume that role. Abouaoun, director of the Middle East and North Africa Programs at the Tunis office of the USIP peace research institute, told DW: "I think that France has lost a lot of leverage compared to, let's say, 20 or 30 years ago — for many reasons, not only in Lebanon but in the region in general."

He still sees "some sort of an emotional lifeline" between France and Lebanon, which could have a bearing on public opinion in Lebanon. "But we've seen on many occasions that the political decision-making in Lebanon is not really influenced or affected in any way by what the French say," he added.

Considerably more important, Abouaoun said, was the influence exerted by the Shiite Hezbollah party, which is supported by Iran and considered a terrorist organization by the European Union. Hezbollah has a stake in the government, maintains its own militias and also controls the port of Beirut, where the highly dangerous ammonium nitrate that allegedly caused Tuesday's catastrophic explosion had been stored for years.

Many Lebanese believed that the country's entire corrupt establishment must be ousted, said the Middle East expert, who analyzed the French role as follows: "I don't see France really embracing the demands of the majority of the population, which are to basically get rid of the corrupt political establishment. They have relationships with some of the leadership. And this would also put another limitation on how much France can really become the main influencer in the region." 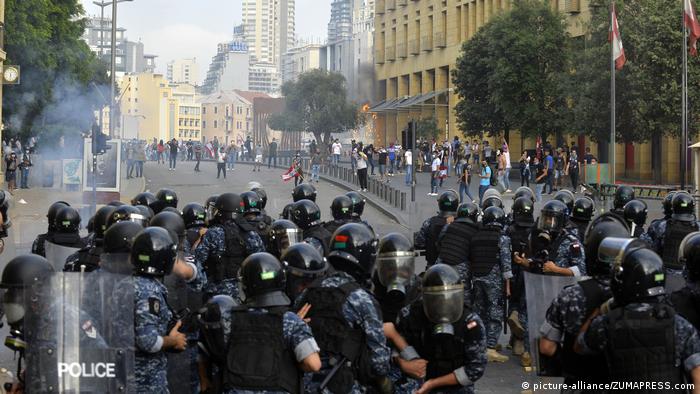 Protests in June: Many people in Lebanon were already unhappy with their government before the explosion

He added that anti-establishment forces within the population had not yet reached "critical mass." The established parties, which were operating along religious lines still had support, but it was diminishing. Like Sunnis, Shiites make up 27% of the population, while 39% are Christian, and 5% are Druze.

Other nations muscling in

Among regional powers, Iran is certainly the most influential in Lebanon, Elie Abouaoun said. Saudi-Arabia had lost influence during the last couple of years while the US had mounted a comeback only a few months ago. Russia's and Turkey's efforts had not been successful until now.

But the French president's new initiative would probably not move those political weights around very much, the Middle East expert estimated.

Many other nations, including the US and Germany, have also pledged aid. The European Union has mobilized millions of euros as well. This Saturday, the president of the European Council, Charles Michel, will travel to Beirut as a representative of the EU member states, and he would prefer a coordinated political initiative launched by all the European nations, including France, instead of Macron going it alone.

Maximilian Felsch of the Haigazian University in Beirut is skeptical about subsequent political developments in battered Lebanon. Conflicts between religious groups could erupt, particularly as Hezbollah was apparently responsible for storing the explosive material and primarily Christian neighborhoods around the port were destroyed.

"There is the risk that the current crisis will quickly spiral out of control and turn into some kind of conflict between religious confessions," Felsch said: On the one hand there were Christians, who are now asking for France's protection, on the other there were Shiites, who are keen on maintaining Hezbollah's influence  and, with it, direct influence from Iran.