Over 55,000 sign petition for France to take control of Lebanon

More than 55,000 people have signed a petition calling for France to take control of Lebanon following the deadly blast in Beirut. Critics say corruption and mismanagement by Lebanon's government was the cause. 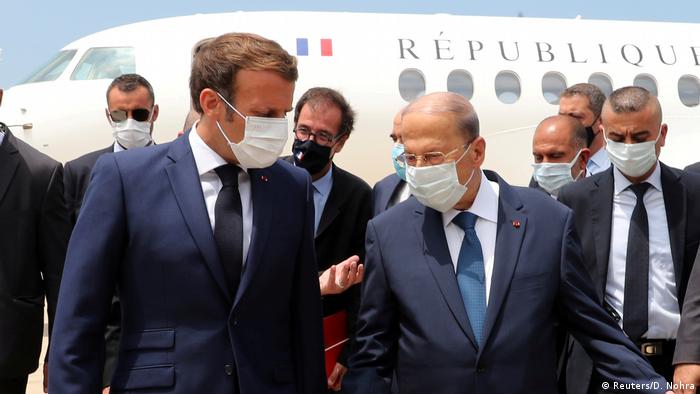 Over 57,000 people have signed an online petition to "place Lebanon under a French mandate for the next 10 years" as of Friday morning.

The petition on the community petition website Avaaz was reportedly set up by Lebanese citizens on Wednesday following the explosion that rocked Beirut on Tuesday, killing over 140 people and injuring more than 5,000.

"Lebanon’s officials have clearly shown a total inability to secure and manage the country," the petition reads. "With a failing system, corruption, terrorism and militia the country has just reached its last breath."

"We believe Lebanon should go back under the French mandate in order to establish a clean and durable governance."

"That's how desperate some Lebanese are," she said. "So much has been lost from where there was already so little. They lost their homes, they lost their properties, they cannot save their children. They don't know what to do."

France controlled the Middle Eastern country from 1920 to 1945 under a mandate set up after World War I.

DW’s Dima Tarhini: 'The Lebanese have lost their capital'

DW’s Dima Tarhini: 'The Lebanese have lost their capital'

The petition was directed at French President Emmanuel Macron, who on Thursday became the first foreign leader to arrive in Beirut since the tragedy struck.

Macron warned that Lebanon will "continue to sink" without reforms as he arrived in Beirut. He promised that France will help mobilize aid for the city, which has seen billions of dollars worth of damage and destruction.

Macron told angry crowds in downtown Beirut that he would seek a new deal with political authorities.

"I guarantee you this — aid will not go to corrupt hands," Macron told protesters.

"I will talk to all political forces to ask them for a new pact. I am here today to propose a new political pact to them," he said.

Crowds protesting on Beirut’s street called for Macron to help oust the country’s leadership. Shock has quickly turned to anger in the city, with many commentators and protesters saying that corruption and incompetence among the political classes were responsible for the deadly explosion.

Prosecutors in France have opened an investigation into the explosion. At least 21 French citizens were injured and one killed in the blast.

Even before the coronavirus pandemic, Lebanon was rocked by protests with people angry with the government and economy. A recent devaluation of the currency saw many Lebanese people lose thousands of dollars in savings.

This story was updated to reflect the number of petition signers on 7 August.

A powerful explosion rocked the Lebanese capital of Beirut, killing at least 100 people and injuring thousands more. Hospitals quickly filled beyond capacity and have pleaded for blood supplies.