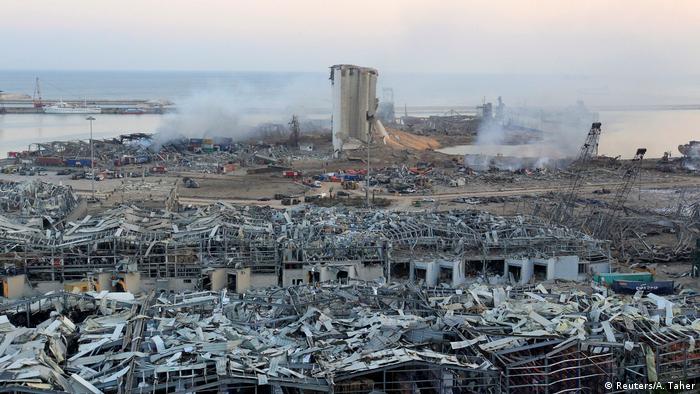 Twin explosions ripped through the port of the Lebanese capital, Beirut, on Tuesday, killing at least 137 people and injuring about 5,000 others, according to the country's Health Ministry. DW explores what happened — and what we have yet to find out.

Online videos of the disaster showed a dark cloud with sparks and lights inside after the first blast, before a much larger explosion shook the Lebanese capital.

According to Germany's geosciences center GFZ, the second explosion struck with a force of a 3.5 magnitude earthquake. The shock wave could be felt as far away as Cyprus some 110 miles (180 kilometers) northwest of Beirut.

The site of the explosion in Beirut

What caused the explosion?

While the cause of the first blast remains unclear, Lebanese officials said the second mammoth explosion was caused by 2,750 metric tons of ammonium nitrate that was being stored at the port.

Ammonium nitrate is a chemical compound found in agricultural fertilizer and is also used in mining charges and even in bombs.

Prime Minister Hassan Diab said the explosive substance had been stored at the port for six years after it was confiscated from a cargo ship in 2014.

The number of those killed and injured is expected to rise as rescue teams search the rubble for survivors and victims. At least 137 people were killed and another 5,000 injured at the time of writing, according to health ministry figures.

Several victims were still being identified. Throughout the night, radio presenters read the name of missing or wounded people, and an Instagram page called "Locating Victims Beirut" began posting photographs of missing people.

Several countries, including Germany, the Netherlands, Russia and the Czech Republic have sent rescue teams to help with the search.

Germany's Federal Agency for Technical Relief said at least eight German nationals were injured in the disaster, while the Netherlands confirmed that the Dutch Ambassador to Lebanon and his wife were among the wounded. Some 24 French citizens were injured and one died, according to ministers.

Bangladesh's military said 21 members of the United Nations Interim Force and the Bangladesh Navy were injured in the explosion.

What is the damage?

The power of the explosion caused buildings to crumble as walls and roofs collapsed. Balconies lay on the street and chairs from nearby restaurants were found upside down.

The streets of the city center were covered in debris and class. Vehicles and ships were also damaged.

The blast also consumed a major wheat silo at the port, raising concerns that the country, which relies on imports and is struggling economically amid the coronavirus pandemic, could struggle to feed itself.

The government has estimated the explosions caused between $3 billion (€2.53 billion) and $5 billion of damage. Between 200,000 and 250,000 people have been made homeless, according to official figures.

Hospitals in the area have been overrun with patients, some being treated in corridors and parking lots due to lack of capacity. They have pleaded for blood donations and as well as generators to ensure the electricity stays on.

What we don't know

Lebanese media also reported that the first explosion may have been sparked by welding work in a warehouse — but authorities have not addressed the reports.

What is the government is doing?

Lebanese President Michel Aoun chaired an emergency Cabinet meeting on Wednesday during which they announced a two-week state of emergency.

Prime Minister Diab declared Wednesday a day of mourning in Lebanon. He also condemned that ammonium nitrate was sitting at a port warehouse for more than half a decade.

"It is unacceptable that a shipment of 2,750 tons of ammonium nitrate has been present for six years in a warehouse, without taking preventive measures," Diab said at a defense council meeting, according to his spokesman later briefing reporters.

"We cannot remain silent on this issue ... I will not rest until I know who was responsible for what happened and give them harshest punishment."

Beirut blast: Condolences and aid pour in for Lebanon after deadly explosion

Well wishes and promises of assistance are flooding in after the deadly explosion in Lebanon. France said it had already dispatched aid, Germany said embassy staff were among the injured, and Trump hinted at foul play.