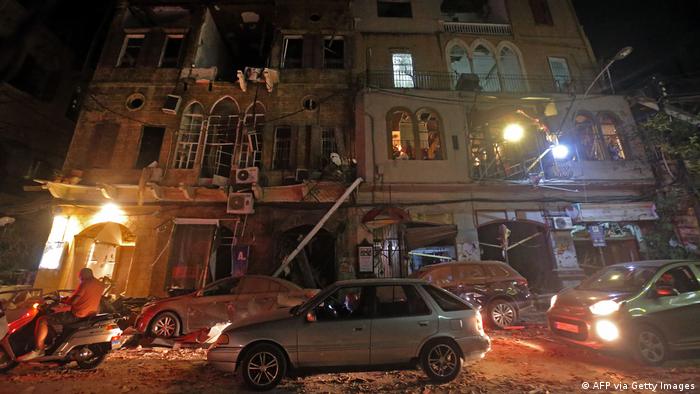 Condolences poured in from across the world for Lebanon, after its capital, Beirut, was rocked by a massive explosion that killed at least 100 and injured over 4,000 others on Tuesday.

UN Secretary-General Antonio Guterres expressed his "deepest condolences ... following the horrific explosions in Beirut," adding that United Nations staff were among the injured.

German Chancellor Angela Merkel expressed her sadness and pledged rapid assistance in a letter of condolence to Prime Minister Diab on Wednesday. In the letter, Merkel wrote: "I am very dismayed to learn of the explosion in Beirut, which has claimed many victims."

German President Frank-Walter Steinmeier, too, sent condolences. Writing to Michael Aoun, his Lebanese counterpart, Steinmeier conveyed his "shock," saying: "The images of the massive destruction in the middle of the city shook me deeply." Expressing sympathy for victims and their families, Steinmeier told Aoun, "I wish you and your citizens strength and confidence in these difficult times."

"The images of Beirut struck our hearts," said Maas. The Foreign Ministry also convened a crisis management team on Wednesday to discuss a plan of action.

A number of German governmental agencies, as well as the military, are preparing to deploy representatives to Lebanon in order to help with recovery efforts as well as to help German Embassy workers process requests from German citizens seeking assistance. Berlin has said it has "no hard numbers" regarding injured nationals but added, "there are a significant number of Germans" living in the country.

Germany's Foreign Ministry had said employees of the German embassy in Lebanon were among those injured by the blast.

Queen Elizabeth II, in a letter of condolence, expressed her sorrow for the people of Lebanon. A letter issued from Buckingham Palace, read: "Prince Philip and I were deeply saddened by the news. Our thoughts and prayers are with the families and friends of those who have been injured or lost their lives, and all of those whose homes and livelihoods have been affected."

“Deeply pained to hear of the massive explosions in Beirut with precious lives lost & thousand injured,” he wrote. “We stand in solidarity with our Lebanese brethren in their difficult hour, sharing their sorrow & grief. May Allah grant speedy recovery to the injured & strength to the bereaved.”

Israel's Prime Minister, Benjamin Netanyahu, said that he had instructed the NSC head, Ben-Shabbat, to speak to the UN Special Coordinator for the Middle East Peace Process to clarify how Israel can further assist Lebanon.

The director of a hospital in northern Israel also offered to help treat the victims. Speaking in Arabic on Army Radio on Wednesday, the Head of Galilee Medical Centre in Nahayira, Doctor Masad Brahoum said, "We only want to give a helping hand. Whoever comes will get treatment and will leave healthy and whole."

However, Israel and Lebanon do not hold diplomatic relations. Lebanese officials rejected an official Israeli offer to send humanitarian aid, saying, "We do not take aid from an enemy state."

"We hope that the circumstances of this incident will be determined as soon as possible and that peace will return to Beirut."

Iran-backed Lebanese Shi'ite group Hezbollah said it did not believe Israeli rocket attacks were behind the blast, while the Israeli military also denied involvement in the explosion. Lebanese Prime Minister Diab later said that the second, larger explosion had been caused by a large stockpile of ammonium nitrate — a volatile chemical with many uses ranging from agricultural fertilizer to bomb-making.

'Too early' to speculate

US President Donald Trump offered his condolences and said the US stood ready to assist Lebanon, but he also indicated that his generals "seem to feel" the massive explosion was a "terrible attack" of some kind.

"It would seem like it based on the explosion. I met with some of our great generals and they just seem to feel it was," Trump claimed. "This was not a ... some kind of a manufacturing explosion type of a event. ... They seem to think it was an attack. It was a bomb of some kind, yes."

Trump's comments were issued at a similar time to Lebanese updates on the large stockpile of ammonium nitrate, potentially explaining the apparent contradiction.

Mike Pompeo, US's Secretary of State, said the US was monitoring the situation.

British officials, however, said that it was too early to speculate on the cause of the blast. "The Lebanese authorities are of course investigating the cause of that tragedy and before we have the results of that inquiry it is premature to speculate," British junior education minister Nick Gibb told Sky.

France's President, Emmanuel Macron, issued tweets in French and then in Arabic. "I express my brotherly solidarity with the Lebanese people after the explosion," Macron said, adding that French aid and resources had already been dispatched towards Beirut.

France is expected to send two planes with dozens of emergency workers, a mobile medical unit and 15 tons of aid material to Beirut. Macron’s office said the aid should allow for the treatment of around 500 victims.

Additionally, French peacekeepers stationed in Lebanon have been helping in the aftermath of the blast.

The European Commission tweeted that its emergency response coordination center had activated a rapid mapping service to support local authorities.

Czech Interior Minister Jan Hamacek said Lebanon accepted an offer to send a team of 37 rescuers with sniffer dogs to Beirut, while Denmark said it was ready to provide humanitarian assistance and Greece has said it is ready to help authorities "with all means at its disposal."

Jordan said a military field hospital including all necessary personnel will be dispatched, according to the Royal Court. Egypt has also opened a field hospital in Beirut to receive the wounded.

Vladimir Putin, Russia's President, sent a telegram to his Lebanese counterpart offering his condolences for the loss of life from the blast.

Russian emergency officials later pledged to send five planeloads of aid to Beirut, while the Ministry for Emergency Situations said it will send rescuers, medical workers, a makeshift hospital and a lab for coronavirus testing to Lebanon.

Boris Johnson, the PM of UK, said that the pictures from Beirut were "shocking" and that the UK would offer help, including to British nationals affected by the blast.

The Day with Brent Goff: Blasts in Beirut

Beirut explosion live updates: Half of city affected by damage

An explosion ripped through the port in the Lebanese capital and 300,000 people are now homeless. Rescue teams are searching through the rubble for survivors. Follow DW for live updates.