′Apocalyptic′ scenes as Lebanon reels from trauma and rage | Middle East | News and analysis of events in the Arab world | DW | 05.08.2020 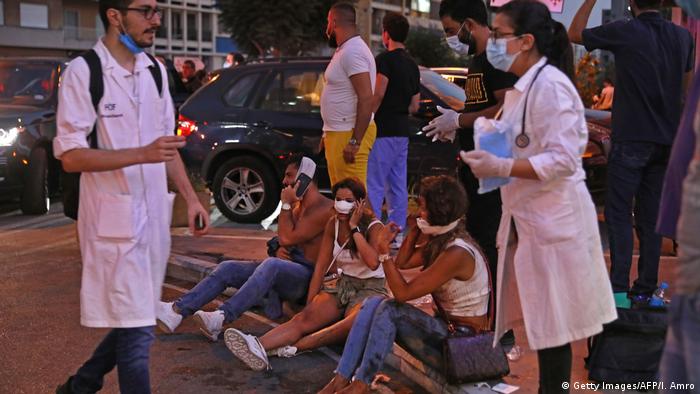 Of the Beirutis who did get some sleep overnight, many woke up on Wednesday coming to terms with the trauma and rage triggered by the massive explosion that tore through the city the day before. Lebanon is already facing hyperinflation, a growing coronavirus pandemic and a hunger crisis.

The blast, which Lebanese officials said was caused by 2,700 tons of ammonium nitrate stored at the port, leveled a large section of the capital, with the shock wave shattering windows far beyond the immediate area.

Fred Bteich, a Lebanese surgeon who narrowly missed being caught up in the explosion, described the situation overnight as a "war scene, it was apocalyptic," with patients piled up in the emergency room of the hospital where he works in the suburb of Achrafieh.

"We operated on some people, we didn't know their names, didn't know who they were, if they had any relatives. We've seen some horrible things," Bteich told DW. "Sometimes I've had to operate on [technically] dead people, just for the sake of doing so, [and] sometimes children as young as four to five-years old. We're going to have a lot more casualties, I think."

While some of the injured were still being pulled from the rubble, the ammonium nitrate thought to have fueled the blast can also have "devastating effects on the human body, and the repercussions can be seen a few years later," Bteich said.

As of midday Wednesday more than 100 people had died and 4,000 were injured, according to the Lebanese Red Cross.

With large parts of the city also physically demolished, "everybody knows somebody who has been hit by this catastrophe," Bteich said. "It looked like Hiroshima."

Many families in the vicinity of the blast had their homes damaged or destroyed, piling the problem of a place to sleep on top of the trauma. Some 300,000 have been left homeless, according to Beirut Mayor Marwan Abboud.

Some on social media began to offer strangers with nowhere to go a place stay, with individuals and concerned hoteliers posting their phone numbers under the hashtag "#ourhomesareopen."

While such examples of solidarity add to other instances of unity, seen through Facebook groups previously set up to barter goods in the face of the economic crisis, support has also flowed in from across the country and around the world.

Although it is too soon for many to think of the future impact the blast will have on their lives, analysts say the rage directed at those responsible will have a huge political fallout.

"They are expecting that after this, when they start to investigate who is responsible, it will produce another chaotic issue because there's very little trust between the Lebanese citizens and the authorities," DW correspondent Razan Salman said. "This is in addition to the economic crises that Lebanon has been suffering from since October."

"People who witnessed the civil war said they haven't seen anything like this before."

Before the blast, Lebanon was expecting a verdict this week in the international trial against the alleged killers of former Lebanese Prime Minister Rafik Hariri. The Special Tribunal for Lebanon has postponed the announcement of the verdict until August 18. Such a judgement may have added to political tensions in the country, already riven by protests and dissatisfaction with the country's sectarian politics and allegedly corrupt politicians.

That is "definitely not on anybody's mind right now," Salman said. "Everybody is still in shock, still in panic. I don't think anybody is even thinking about the verdict anymore."

Whether this proves to be a moment of unity for Lebanon as people pick up their lives or a reckoning for its government is all still in doubt.

"I don't really care what the real story behind it is, whether it was accidental, on purpose or political — the losses we've had are colossal and I do not think Beirut will be able to recover from this for quite a while," Bteich said.