Egypt's prisons not fit for humans

The death of a young Egyptian artist in prison has sent shockwaves across the country. With overcrowding, rampant abuse and no access to health care, Egypt's facilities aren't fit for any kind of prisoner, NGOs say. 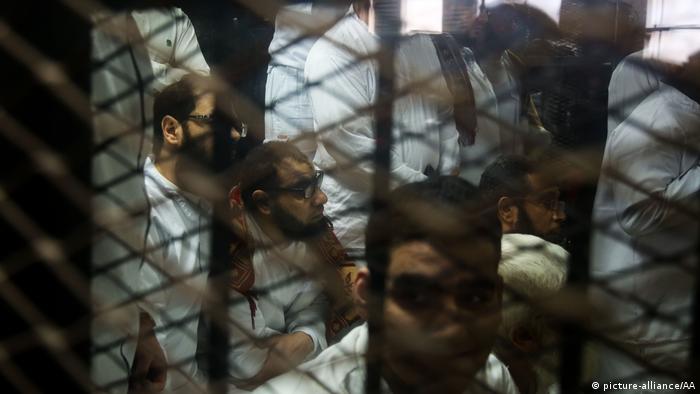 Shady Habash was far from a criminal. As a rising filmmaker with a knack for larger-than-life aesthetics, Habash was enjoying the thrill of his craft before he was torn from his life and thrown into Cairo's Tora prison.

In 2018, he was charged with joining a terrorist organization and spreading fake news after directing a music video for exiled activist rocker Ramy Essam's track "Balaha." The song was a critical take of Egypt's general-turned-president, Abdel Fattah el-Sissi.

Habash died in his cell earlier this month, at the age of 24. For hours, fellow prisoners had urged prison officials to get medical assistance, reportedly banging on the walls to try and jolt guards into action before it was too late.

Egyptian prosecutors later claimed that Habash died from drinking hand sanitizer "by accident." But his death wasn't the only one at the notorious prison facility in recent months.

"Shady Habash's death was the third in 10 months among prisoners of conscience in Tora prison's cellblock 4," said the Cairo Institute for Human Rights Studies. "Prisoners of conscience are often left to die in prison … without trial or due process, in appalling conditions that include the deliberate withholding of health care."

It is a hard figure to gauge but most estimates place the number of people in Egyptian prisons at more than 100,000, including those in pretrial detention.

According to official figures, the criminal justice system is well past the brink, with prisons at 160% over capacity and jails at 300% over capacity. Those conditions mean that prisoners are often forced to sleep on top of each other on bare concrete floors in squalid facilities that lack adequate equipment to mitigate Egypt's extreme weather.

"Detention conditions in Egypt are, in general, overcrowded to the extent that sometimes detainees cannot sleep at the same time because there's not enough space, so they sleep in shifts," said Amr Magdi, Middle East researcher at Human Rights Watch. "There's not enough space there for everyone to stretch."

'I couldn't tell from the screams'

An activist writer and former detainee confirmed the overcrowded conditions and abuses committed in Egyptian prisons.

Read more: Photojournalist Shawkan: How to explain the repression of freedom of expression

"In the cell, we were 70 people in a tiny room," said the writer, who spoke to DW on condition of anonymity. "We were taking turns sitting down on the floor, not even sleeping. The rest of us had to stand but we couldn't move. Walking was a luxury."

But overcrowding wasn't the only problem. Prison officials would often take liberties with those detained.

The activist said more than a dozen children under the age of 16, including girls, had been taken to an interrogation room during their time at the detention facility. "I couldn't tell from the screams whether they were interrogating the boys or the girls," the activist said.

Overcrowded conditions and abuse further undermine the lives of prisoners when access to basic health care is denied. For many detainees with chronic diseases, receiving adequate treatment is improbable, at best.

"It's very difficult for someone to actually get transferred to a hospital," Magdi said. "Even when this happens, they usually go to the hospital for a test and then go right back to prison, despite the fact that their condition might warrant hospitalization."

Human Rights Watch has called on the Egyptian government to release prisoners of conscience and other categories of detainees, including those jailed for being unable to pay fines as a result of poverty. Magdi said the conditions amount to a perfect storm within the context of the coronavirus pandemic.

'Repressed, yet so loud'

For exiled artist Ramy Essam, the only way to move forward was to write a new song, "Prison doesn't kill." The track was going to form part of a renewed campaign calling for Habash's release. The lyrics were a letter written by Habash and smuggled out of prison before his untimely death.

"The track is a reminder for us all to take action to release political prisoners, artists and others whose human rights are violated," Essam told DW. "It is the voice of hundreds of thousands who are going through the same experience at the moment, a voice we have to hear. Repressed, yet so loud."