Egyptian authorities have arrested thousands in a crackdown on dissent, even its most benign forms. And some former prisoners are finding that they are not really free despite having been released. 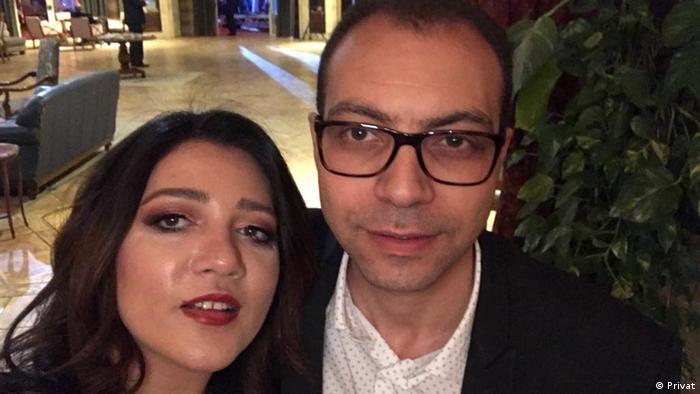 Just before dawn on May 11 last year, Amal Fathy and her husband Mohammed Lotfy's lives changed forever. As Amal was trying to get their young son to sleep, Lotfy heard a knock at the door. On the other side, a plainclothes security officer stood alongside a group of masked and heavily armed special forces. Lotfy let them in and invited them to sit down.

"The plainclothes security official pulled up a chair at the dining table. He said to me, 'You must know why we are here,'" recalled Lotfy.

While Lotfy was working documenting human rights abuses with his organization, the Egyptian Commission for Rights and Freedoms, it had been Amal that was in danger, despite her having done no more than upload a video to social media complaining about sexual harassment she'd suffered during a visit to the bank. The video had gone viral, and smears about Amal, a former actress and activist, began to appear in the pro-government local media.

Still, said Lotfy, "I didn't expect her to be arrested." When the officers demanded that the couple come to the local police station, they found another dozen masked and armed special forces waiting outside their building who looked as though they were prepared to arrest hardened criminals.

'We don't know which terrorist group'

"We don't know which terrorist group or group they're referring to and we don't know what the evidence against her is — we don't have access to the case file. We don't even know if it's about the video as well, or if it's actually about something else," said Lotfy.

Amal's detention punished both her and her family. "For almost three months, I wasn't myself," Lotfy recounted. "I couldn't stay seated even for an hour. I was hyperactive and nervous. I was constantly trying to distract myself from the idea that my wife was detained and there was little I could do. It even affected my relationship with our son, as I couldn't sit with him for more than an hour." When their son, now almost 4 years old, would ask where his mother was, Lotfy told him Amal was in hospital. During a visit to the prison, Amal convinced the child that she was receiving medical treatment for tiredness and would return to him soon.

The 34-year-old was held in pretrial detention until December 30 last year, when she was released on probation. She received confirmation of her first sentence just three days later. Both cases still loom large over the family's day-to-day existence, amid fears that Amal could be rearrested at any time. Although she is now out of prison, confusion surrounding the terms of her probation means that she remains under house arrest. Her case is, sadly, far from unique: She is now one of a growing number of high-profile prisoners released into what human rights groups have called an open-air prison.

Released, but not free

An estimated 60,000 people are currently imprisoned in Egypt on political or politically related charges, according to Human Rights Watch, although Egyptian President Abdel-Fattah el-Sissi and the Egyptian authorities have routinely denied that any political prisoners exist in the country. Even release from detention doesn't always mean freedom, especially for those who were imprisoned in cases related to freedom of expression. This year, both the award-winning photographer Shawkan and the renowned activist Alaa Abdel-Fattah have been released after five years behind bars, but they are required to spend every night at a police station for the next five.

Treatment like this caused Amnesty International to label Egypt an "open-air prison for critics," due to the crackdown on even seemingly benign dissent, like Amal's video. "Over the course of 2018, Egyptian authorities have arrested at least 113 individuals for absurd reasons, including satire, tweeting, supporting football clubs, denouncing sexual harassment, editing movies, giving or conducting interviews. In some cases, those arrested had done nothing at all. The authorities have accused them of 'membership of terrorist groups' and 'disseminating false news,'" the human rights group said.

The price of freedom

Life outside the walls of Qanater prison is its own form of punishment for the family. The terms of Amal's probation initially required her to remain under house arrest and check in at a police station near the family's former home every Saturday evening. The Giza police directorate then removed the demand that Amal remain under house arrest, and changed her probation demand to two four-hour visits to the police station each week. "But the police directorate never sent a fax to update our police station with the new decision," Lotfy explained, highlighting the Kafkaesque scenario that ensnares prisoners and former prisoners alike in a web of bureaucracy.

"She's completely in limbo," said Lotfy. "She has a sentence that isn't being implemented but could be at any time [for the second case]. She also has a probation sentence that is not being implemented and another probation canceled, but only partly." The lack of clarity about Amal's sentence creates anxieties for the family, and at first caused Amal to have regular panic attacks.

"It affects us a lot. We're not free to go out when we wish, as she fears she might be stopped at a checkpoint and rearrested. I call her all the time, fearful that the police may come and check to see if she's remained under house arrest or not. When she goes to the police station, we are worried she will be taken into custody again to serve her sentence," said Lotfy. He and Amal's lawyers have filed an appeal against the first charge, including the request for a presidential pardon. But even if the appeal is accepted, Amal will likely have to face a retrial, risking more jail time.

"She can't plan her life," said Lotfy. "She's still accused, meaning she could be rearrested at any time and sent to trial." The threat of his wife's repeated detention also impacts on Lotfy's own ability to focus on his own human rights work, which involves tracking enforced disappearances and other infractions committed by the Egyptian state.

"I'd been working in the field of human rights for 15 years before she was arrested," he said. "I was constantly hearing difficult stories and writing reports, documenting torture. I never truly understood the pain of the family members; I thought more about the pain of the victim. Only when I lived it did I realize how devastating it is."