A leading Egyptian pro-democracy campaigner, Alaa Abdel-Fattah, has been freed from jail after five years behind bars. He was sentenced for his part in an illegal protest and will still live under "police observation." 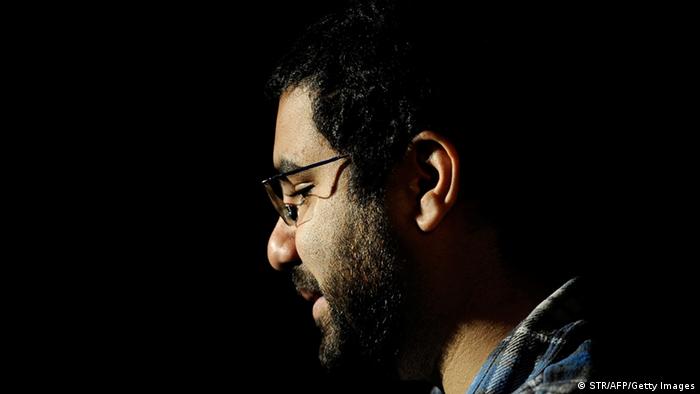 A key Egyptian pro-democracy activist and blogger, Alaa Abdel-Fattah, was released from prison on Friday after serving a five-year sentence for holding an unauthorized protest.

His imprisonment in 2013 for taking part in a peaceful demonstration was seen by many observers as another indication that Egypt was returning to autocratic rule. Dozens of activists have been jailed in Egypt in recent years for violating draconian laws banning public gatherings that rights advocates say are aimed only at muzzling dissent.

Though released from prison, Abdel-Fattah is required to report to a police station every day for the next five years.

Who is Alaa Abdel-Fattah?

As an activist and blogger, Alaa Abdel-Fattah, now 37, became a symbol for the uprising against autocratic former President Hosni Mubarak amid the Arab Spring rebellions that swept the Middle East in 2011.

He received the Reporters Without Borders AWARD for his blog, Manal and Alaa's Bit Bucket, at DW's BOBs weblog competition in 2005.

He was arrested in 2013 for participating in a demonstration outside the parliament building in Cairo to protest at the introduction of the laws on street protests. After the demonstration, his house was raided by security forces, who beat up his wife and confiscated his laptops. He later turned himself in.

What has happened in Egypt?

Under current President Abdel-Fattah el-Sissi, many of the freedoms won in the 2011 uprising have been rolled back. The Egyptian government has argued that the restrictive laws are necessary to restore order after the army ousted the country's first democratically elected president, Mohammed Morsi, who succeeded Mubarak after a short period of military rule.