Mahmoud Abu Zaid was detained while covering clashes between protesters and security forces in 2013. While incarcerated, DW published a letter in which he wrote that he didn't know "when this nightmare is going to end." 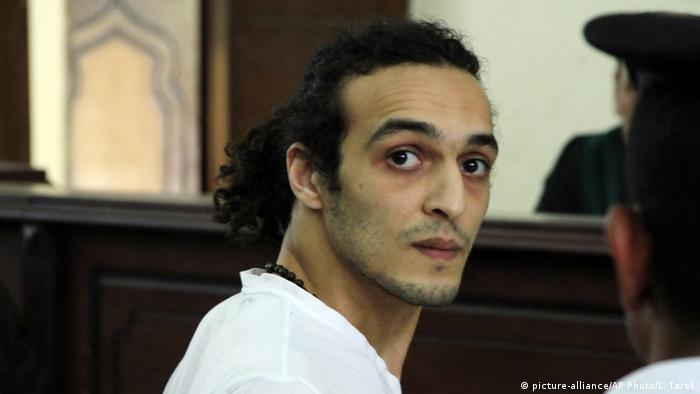 Mahmoud Abu Zaid, an award-winning Egyptian photojournalist popularly known as Shawkan, was released from prison on Monday after spending more than five years behind bars.

On his Twitter account, managed by the #FreeShawkan campaign, Shawkan wrote "oh welcome asphalt" with a picture of him as a free man.

He was arrested in August 2013 while taking photos at the Rabaa Square in Cairo as Muslim Brotherhood supporters protested against the ouster and removal by the military of Egypt's then President Mohammed Morsi. The demonstrations were broken up by security forces in an operation that left hundreds dead.

The photojournalist was accused of being part of the Muslim Brotherhood, which Egyptian authorities had declared a terrorist organization. He was sentenced to five years in prison last August, but his release was expected as he spent more than five years in pre-trial detention.

Another 214 people who were sentenced to five years in prison were also released on Monday.

Shawkan's lawyer, Taher Abuel-Naser, said he was released from a police station early this morning. He has been ordered to spend every night in a police station for the next five years under a "police observation" order.

However, Shawkan insisted he will continue working as a photojournalist, saying he was "not the first or the last journalist to be detained."

Press crackdown
In an open letter published by DW in 2015, Shawkan wrote that journalism has become a crime in Egypt and said he was "living in a tiny cell under harsh conditions that an animal wouldn't bear."

I don't know when this nightmare is going to end just because I was doing my job as a photojournalist during the operation of the dispersal of the Rabaa al-Adawiya protest camp," he wrote. "Somehow I'm considered a 'supporter of the disposed President Morsi.'"

Read more: Election in Egypt: 'El-Sissi is on the side of the autocratic rulers'

President Abdel Fattah el-Sissi, a former general, has overseen a large crackdown on critics in recent years, jailing thousands of Morsi's supporters and some prominent activists behind a 2011 uprising that ousted former autocratic President Hosni Mubarak.

Reporters Without Borders ranks Egypt 161st out of 180 countries on its press freedom index.

Despite coming to power on a wave of popular support, President Abdel-Fattah el-Sissi appears to have the same aspirations as his autocratic predecessors. DW looks at his swift rise from army chief to two-term president. (02.04.2018)

DW Freedom works to promote greater freedom of speech and the media around the world by raising awareness of the detention and intimidation of journalists, activists and bloggers. Meet some of them. (14.12.2018)