The European Court of Justice has rejected a challenge by Hungary to a decision to probe Budapest's alleged "serious breach" of the bloc's democratic values. Hungary could lose its right to vote in EU proceedings. 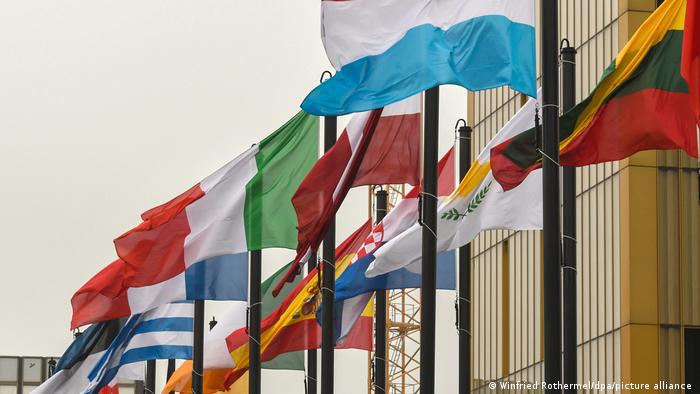 Hungary argued that abstentions should have counted, meaning the two-thirds threshold was not reached; the court disagreed

The European Union's top court on Thursday threw out Hungary's claim that the European Parliament vote that deemed Budapest to be in breach of the bloc's democratic standards was invalid.

The parliament launched a procedure in 2018 to force the remaining 26 member states to sanction Hungary over concerns about the country's constitutional and electoral systems, the independence of its judiciary, corruption and conflicts of interest.

The "Article 7" procedure was contained in a resolution that was adopted after 448 lawmakers agreed with the proposal, 197 voted against and 48 abstained. Budapest argued that, when taking into account those who didn't vote, the two-thirds majority threshold had not been reached.

Prime Minister Viktor Orban's government appealed against the resolution, arguing that the voting procedure "seriously infringed" on rules by ignoring the abstentions.

But the Luxembourg court countered on Thursday: "When calculating the votes cast when that resolution was adopted, the Parliament was right to exclude the taking into account of abstentions," it said in a statement.

"MEPs' abstentions do not have to be counted in order to determine whether the majority of two thirds of the votes cast (needed to launch the procedure) has been reached," it said.

Press freedom under pressure in the EU

Hungary and EU at loggerheads

It's the first time the European Parliament has initiated such an action.

The European Commission, the EU's executive branch, has also taken similar action against Budapest. If four-fifths of of the bloc's member states agree that "there is a clear risk of a serious breach" of EU values, Hungary could lose its voting rights.

According to the EU's founding treaties, the bloc "is founded on the values of respect for human dignity, freedom, democracy, equality, the rule of law and respect for human rights, including the rights of persons belonging to minorities."

The Hungarian government has announced plans to produce the Chinese-developed COVID-19 vaccine locally in a planned €157 million plant. Follow DW for the latest.