The Ocean Cleanup nonprofit aims to deploy "The Interceptor" in 1,000 rivers responsible for 80% of plastic entering oceans. It should use natural currents to collect plastic, while allowing animals and ships to pass. 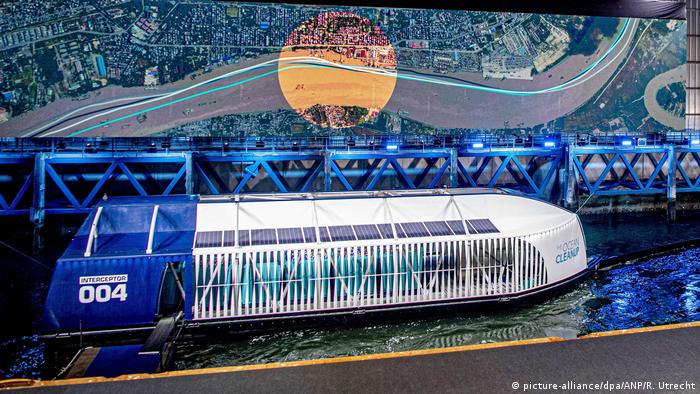 A Dutch foundation striving to remove plastic from the world's oceans unveiled on Saturday an invention to remove waste in rivers before it enters the sea.

The Ocean Cleanup says the barge called "The Interceptor" will "close the tap" on the greatest source of plastic entering oceans.

The nonprofit established by 25-year-old Boyan Slat estimates that 80% of river plastic stems from just 1,000 rivers, the main arteries that carry waste from land to the ocean.

The 24-meter-long (79 feet), solar-powered barge will be anchored at strategic locations in rivers and use natural currents to collect plastic, while allowing animals and ships to pass. The invention uses a barrier that guides plastic into a mouth-like bow, from where it rolls up a conveyer belt and is dumped into six dumpsters.

Read more:  Manioc to the rescue in the fight against plastic pollution

The autonomous barge has a capacity of 50 tons of plastic, working around the clock. Once full, a computer sends a message to operators, who then empty the dumpsters and send the contents to local waste management facilities. Under optimal conditions, the barge could collect up to 100 tons per day.

The project will attempt to deploy the system in the world's 1,000 most polluting rivers within five years, The Ocean Cleanup said.

Read more: Microplastic menace has spread to the world's most remote oceans

Prototypes of the device have already been tested in Jakarta, Indonesia and Kuala Lumpur, Malaysia. Two more are ready to be put into action in Vietnam and the Dominican Republic.

Earlier this month, The Ocean Cleanup announced that its specially designed ship and large floating boom had successfully hauled in its first plastic from the "Great Pacific Garbage Patch."

The organization had previously been criticized for focusing on cleaning up ocean garbage and not addressing rivers as the main source of the 9 million tons (8 million metric tons) of plastic that enters the ocean annually.

Indonesian authorities have discovered flip-flops, plastic bottles and cups in a dead sperm whale. Five Asian nations, including Indonesia, are considered the world's worst plastic polluters of the earth's oceans. (20.11.2018)

Around 1,000 tons of trash flows down the Rhine River and is dumped into the ocean every year. Armed with garbage bags and sturdy gloves, volunteers in 58 cities along the famous river decided to do something about it. (15.09.2018)

Microplastics can be found just about everywhere, from the depths of the ocean to our beer. So it's not a surprise that these tiny bits of plastic have made their way into our poo. But what does it mean for our health? (22.10.2018)