The tipsy raccoon apparently couldn't hold back from having a good time at Erfurt's Christmas market. However, the furry creature's daytime drinking binge ended in grisly fashion. 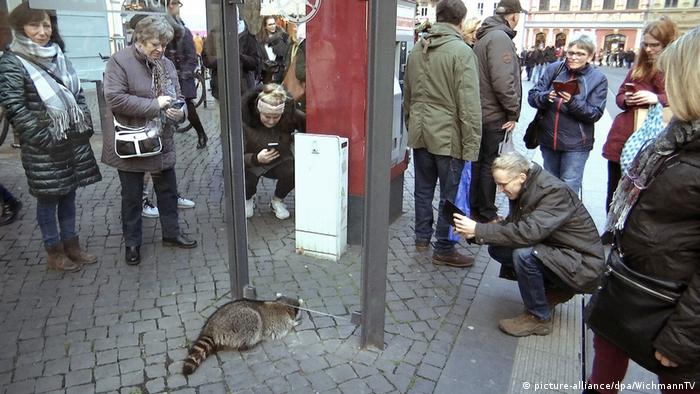 A raccoon indulged in too much mulled wine at a Christmas market in central Germany on Saturday, amusing onlookers as the furry animal staggered about before passing out.

The raccoon was "obviously intoxicated," a police spokesperson from the city of Erfurt said.

"However, a breathalyzer test on the animal was not carried out," police said.

Video of the spectacle showed the raccoon wandering around, playing with a woman's shoes and then taking a rest on some steps in front of a building.

Initial reports suggested the fire department had taken the inebriated raccoon to an animal shelter. However, the case was handed over to a local hunter, who subsequently shot the raccoon.

A similar case made headlines in the summer of 2018 when police officers picked up two tipsy hedgehogs near Erfurt's cathedral, where they had come across discarded bottles of alcohol-infused eggnog. The animals were then taken care of by the zoo.

The Oktoberfest in the southern city of Munich has ended after drawing some 6.3 million guests. Although less beer was consumed than last year, hundreds lost their licenses for driving or riding under the influence. (06.10.2019)

The raccoon spent two days climbing the 24-floor building after becoming stranded. The resilient animal went viral on Twitter after employees and firefighters were unable to rescue it. (13.06.2018)