The Oktoberfest in the southern city of Munich has ended after drawing some 6.3 million guests. Although less beer was consumed than last year, hundreds lost their licenses for driving or riding under the influence. 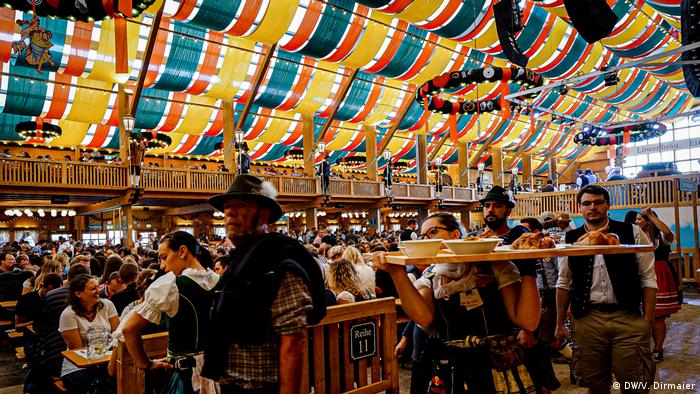 Germany's world-famous Oktoberfest ended on Sunday in the Bavarian city of Munich, with police saying that the beer-fueled event had passed off calmly and pleasantly — for the most part.

In their report on the 16-day-long festival, police noted a slight reduction in actionable offenses (2019: 914; 2018: 924) despite there being approximately the same number of guests as last year. Although police were called on to mediate in more cases than last year — 1,915 times as compared with 1,786 in 2018 —, they attributed this to an increased willingness to inform police early on in potential conflict situations.

The biggest challenge compared with previous years was the presence of e-scooters, the police said. Altogether 414 people were caught riding under the influence, with 254 riders losing their automobile driving licenses on the spot. The two-wheelers were banned from entering the actual festival grounds.

The vehicles were introduced on German streets only in mid-June.

Of the 360 car drivers who were caught drunk at the wheel in the city during the festival, 215 had to give up their licenses immediately. Martins said many drivers had not realized that police were also deployed outside of the festival grounds.

Police said the number of pickpocketing offenses was greatly down on the year before, partly owing to the increased use of video surveillance. Altogether 133 pickpockets were apprehended, most of whom were caught trying to steal from jackets, as bags and rucksacks were banned on the Oktoberfest grounds, known as the "Wiesn." Forty-nine video cameras were set up across the grounds.

However, cases of criminal assault increased slightly compared with 2018, with 263 cases reported as against 256. The offenses included 32 instances involving the use of a beer stein as a weapon.

Forty-five sex offenses were reported in connection with the Oktoberfest, three more than in 2018. Police emphasized that the frequent patrols by plainclothes and uniformed officers, along with video surveillance, meant many situations that could have led to serious sex violations were stopped in time, with 29 arrests being made.

Particularly women have often complained of frequent harassment at the festival, with the large amounts of alcohol normally consumed contributing to offensive behavior on the part of male guests.

Read more: The dark side of Oktoberfest