Electric scooters′ rollout off to a bumpy start in Germany | Germany | News and in-depth reporting from Berlin and beyond | DW | 08.07.2019

Electric scooters' rollout off to a bumpy start in Germany

Germany is seeing a transportation revolution, as electric scooters win over new riders with their speed and ease. But a spike in accidents involving the new vehicles has sparked concern among police and medical experts.

The first lesson when riding an electric scooter, as with all other vehicles, is to try not to hit anybody.

On a busy sunny afternoon in the western German city of Cologne, this proves to be decidedly more difficult than anticipated, as a rush of pedestrians, bicycles and other scooter riders gather along the Rhine River promenade.

"You do have to pay attention, especially to the people walking in front of you," Anjya Rehorst tells DW as she and her husband push their scooters over the cobblestones. "They can't hear you coming."

Electric scooters, or e-scooters, have been flooding the streets of cities across Germany ever since they were given the regulatory green light in mid-June. Hundreds of rental models are currently in action on the streets of Cologne, with the city expecting some 40,000 by the end of the year.

Many new riders, like Rehorst, are big fans of how cheap and easy it is to get around the city using the scooter. When traffic thins out, you can really test out the 20-kilometer-per-hour (12-mile-per-hour) limit on the motor.

But scooters aren't as stable as bikes, and the brakes take more time to kick in. Riding over cobblestones, like the ones that blanket most of Cologne's old city, makes the e-scooter even more wobbly, shaking riders right down to their bones.

"Mine just broke," a middle-aged man says as he unlocks one of the seven scooters parked at random around the square. "It hit a raised cobblestone and stopped working." 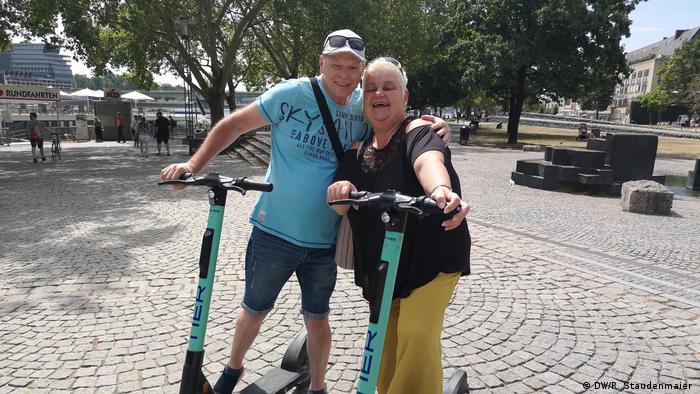 Except for one instance when a 21-year-old got his license taken away for driving an electric scooter while drunk, Cologne has seen relatively few accidents involving the new vehicles.

Other German cities haven't been so lucky.

Munich police have reported a number of accidents, including one where an 85-year-old woman was knocked off her electric scooter after a car cut her off, and another case where a 23-year-old crashed into a police car. Authorities said they'd also stopped 38 drunk people and six people under the influence of drugs who were driving the scooters.

A 28-year-old man in the western German town of Erkelenz made headlines across Germany after he followed his phone's GPS and rode his scooter onto the highway. The man rode for around 7 kilometers (4.3 miles) until he was escorted off the highway by two cars, to waiting police. 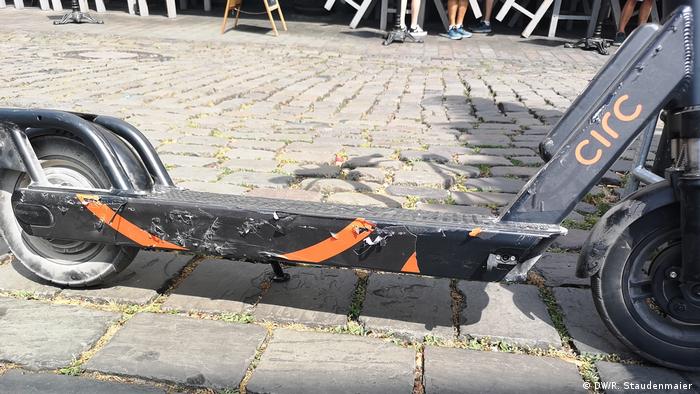 Although it's only been a few weeks since they've been on the streets, some e-scooters are already a little worse for wear

Within the first two weeks of e-scooters being allowed in Berlin, police logged five different traffic accidents caused by the vehicles, with two of the riders sustaining serious injuries. Another eight people were cited in the same time frame for driving their scooters under the influence of alcohol.

Police in Berlin are trying to step up their efforts to inform people, Stefan Drescher, the head of road accident prevention for the Berlin police, told DW. They're particularly trying to target tourists who might not have informed themselves about the rules in Germany.

"We've translated our information flyer into English and will be distributing it in the city," he said, adding that there are currently no plans for any other languages.

The accidents have also sparked concern among the medical community, with some questioning the strategy behind rolling out electric scooters without setting up enough infrastructure to ensure rider safety.

"We're not prepared enough for them in Germany," Christopher Spering, a senior trauma surgeon at the University Medical Center Göttingen, told DW.

Spering, who also heads the injury prevention working group at the German Society for Trauma Surgery (DGU), said riders risk head injuries and broken bones in their hands and ankles.

"There is an extremely high potential for injury," Spering said, adding that the rider's standing position on the scooter makes them "more dangerous than bicycles."

Although it's not required to wear a helmet, doctors and police have strongly urged people to do so. Spering believes setting up special lanes reserved just for e-scooters would do more to protect riders.

"As a medical expert association, we are not against e-scooters," he said. "We're just saying that we need rules for them." 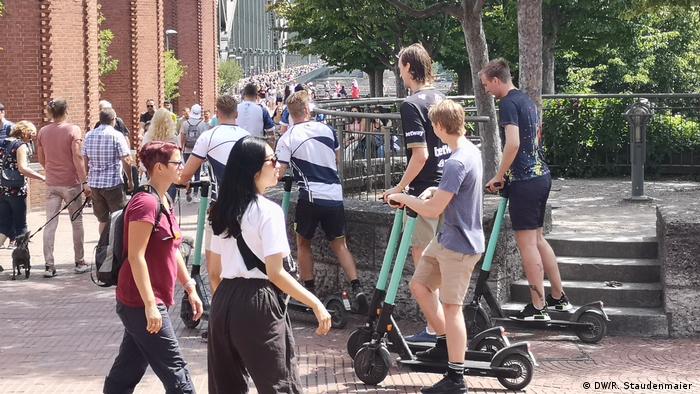 Even on Cologne's packed Hohenzollern Bridge, scooter riders wove through the crowds with relative ease

Back in Cologne, scooter riders appear to have more to fear from pedestrians than the other way around, weaving around the crowds standing outside the city's famous cathedral.

It's forbidden to park electric scooters in certain areas of the city, including around the cathedral. Still, several stray scooters can be seen parked around the square.

"I think they are a good thing," says Sabrina Jeckel, as she inspects a black and orange model. "It's nice to not always have to take the bus or tram."

The 36-year-old isn't worried about people driving safely, saying those who choose to get on an e-scooter generally inform themselves about the rules ahead of time. "Although it does depend on the rider," she adds.

A few steps away, two women try to carefully balance themselves on one e-scooter. With both on board, they then set off toward the Hohenzollern Bridge over the Rhine, deftly darting past the love locks and tourists along the way.

The German Bundesrat has voted to allow electric scooters on the country's roads and bike paths. The UK is now the only major European country yet to approve their use. (17.05.2019)

Electric scooter - made in Germany

Tiny, lightweight electric motors can now power skateboards and scooters travelling at up to 40 kilometers an hour. At these speeds, could vehicles compact enough to fit in a backpack challenge the dominance of the car? (12.09.2016)