The German Bundesrat has voted to allow electric scooters on the country's roads and bike paths. The UK is now the only major European country yet to approve their use. 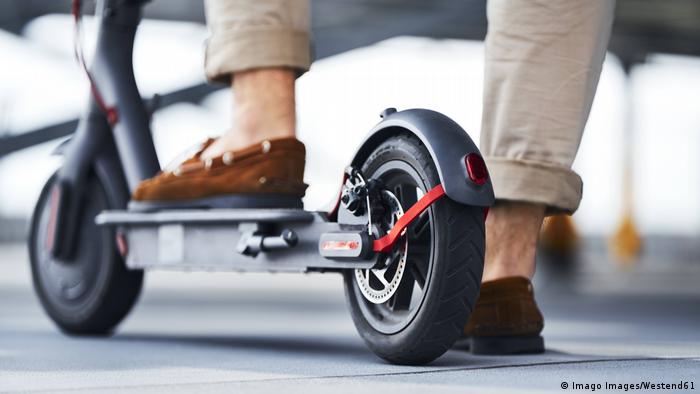 Germany's upper house of Parliament, the Bundesrat, on Friday voted to allow the use of electric scooters with a top speed of 20 kilometers (12 miles) per hour on roads and bike paths.

The approval by the chamber enables e-scooter sharing firms to offer the vehicles for rent on city streets. Critics fear that this could lead to an overburdening of cycle lanes and roads and a high risk of injury both to riders and pedestrians.

E-Mobility: Electro-scooters on the move

Those in favor of introducing e-scooters, such as Transport Minister Andreas Scheuer, see the vehicles as ideal for closing the gaps in public transport systems, cutting the use of cars for short trips in cities and thus their polluting emissions.

E-scooter sharing firms also emphasize the flexibility provided by having scooters readily accessible for spontaneous use across cities.

However, the NGO Friends of the Earth Germany (BUND) has voiced concerns about the negative effects of e-scooters, notably for cyclists. "We run the risk that motorized traffic will crowd out non-motorized traffic on bike paths as well," BUND traffic expert Jens Hilgenberg told the daily Neue Osnabrücker Zeitung.

He also pointed out that e-scooters have a very short lifetime in general, with several European cities swapping out and scrapping the vehicles after just three months.

"Here, the risk is not just that inner cities become littered with broken e-scooters, but that problematic materials such as lithium and aluminum are wasted," Hilgenberg said.

Christoph Spering from the German Society for Orthopaedics and Trauma (DGOU) told the same newspaper that e-scooters considerably raised the danger of accidents.

"E-scooters are extremely dangerous in city traffic, partly because other road users have great difficulty adapting to their presence," he said. He also pointed out that the footboard of scooters was near the ground, meaning that a foot could easily become caught beneath it if the rider fell.

US watchdog group Consumer Reports says it has recorded more than 1,500 scooter-related accidents in the US since 2017.

What is Germany's Bundesrat? The Bundesrat is made up of representatives of each of the 16 Länder, or states, of Germany. It must approve all legislation on policy areas where the states constitutionally have concurrent powers and must implement federal laws.

When will the scooters be on the road? Transport Minister Scheuer is seeking a traffic permit for e-scooters by summer of this year.