Germany to become latest mass market for e-scooters | Germany| News and in-depth reporting from Berlin and beyond | DW | 17.05.2019

They already motor through the United States and many European countries. Soon, they will also be a common sight on Germany's streets. Are we seeing an important shift away from the car in terms of transport policy? 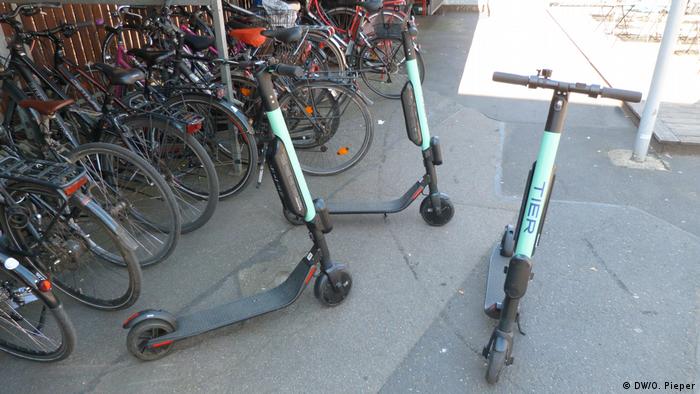 The transport of the future is mint-green. It weighs just over 10 kilograms (22 ounds) and accelerates to an impressive 20 kilometers per hour (12 mph) in just a few seconds. At an industrial site in Cologne, dozens of people have been test-driving electric scooters on a daily basis since the beginning of April. They download the operator's app onto their smartphones, scan the scooter's QR code, and off they go. It works by pushing off with your foot, accelerating with the right hand, braking with the left.

"The scooter is emission-free, allows flexible use, and it is also fun to ride," said Bodo von Braunmühl, head of corporate communications at Tier, a Berlin-based startup. "The scooter is designed to complement other means of transportation, such as public transport." 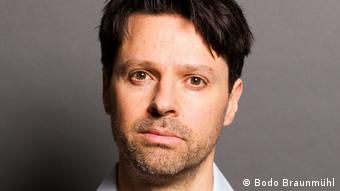 Providers such as Tier are eagerly awaiting the nationwide launch of free-standing e-scooters. Tier started in Vienna in October 2018 and the company has expanded to 20 countries. The base rate to rent a scooter is €1 ($1.12), plus 15 cents for every minute of riding. There is a massive business opportunity on the horizon: Surveys show that two in three Germans consider the scooter to be a good addition to traffic.

"Our fixation on the car is over," Braunmühl said. "Even Germany's biggest automobile association, ADAC, has realized that. Now we have to work together with politicians to initiate a more humane way of urban planning, with an infrastructure that is designed for people, not cars."

E-scooter suppliers may have found the perfect moment to start operating in Germany. Traffic is an issue of concern in Germany's much-discussed energy-policy turnaround; little progress has been made. Forty-seven million passenger cars are registered across Germany, and over 3 million are sold new each year. Emissions from traffic are almost as high as in 1990. It is unlikely that the target of reducing them to 40 percent by 2030 will be achieved. Mobility in Germany still means relying on diesel.

Every Friday, schoolchildren take to the streets to demonstrate for climate protection. The e-scooter industry wants to harness this movement to initiate a change in thinking.

Of course, the scooters have their own sustainability issues, chief among them their lack of durability — demonstrated by the fact that they often do not even last a year. And scooters are almost unusable on cobblestones and in rainy or snowy conditions.

The traffic researcher Heiner Monheim has e-scooter advocates beating down his door. Once, when he was still teaching regional development at the University of Trier, he bought 74 scooters for his students.

"We used to go on excursions, riding in convoy on the road," Monheim said, smiling. "And then the police came and told us: 'Hey, you've got to ride on the sidewalk!' And I just said, 'That can't be right. Are we supposed to zigzag around pedestrians?'"

Now 73, Monheim remains passionate about changing Germany's transport policy and finding other forms of mobility[MOU1] . "We have to get to a point where there are fewer cars on the road," he said. "Our cities are longing for more green areas and less pollution." Monheim believes the only logical solution is to develop alternative means of transport. 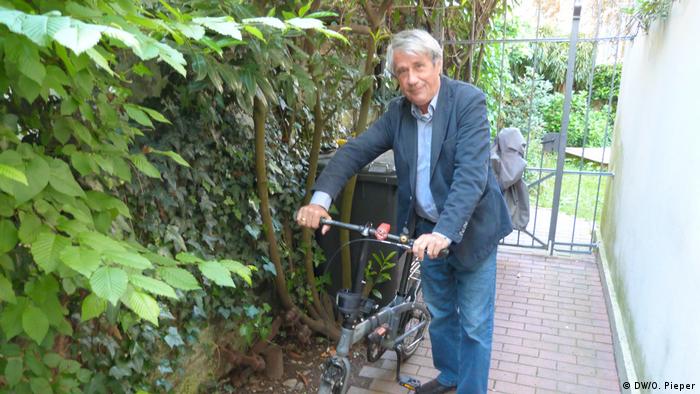 Monheim endorses scooters, but travels more conventionally: by train, with a folding bike

Monheim supports the proposal that e-scooters should ride in cycle paths and, if there are none, on the road. At the same time, he does not hold back with his criticism.

"Germany is a country in which cycle paths are not the norm, but rather the exception. And the cycle paths that currently exist have only been created by halving the sidewalks."

Monheim's vision to solve this problem is called intermodality. This refers to combining different means of transport: "I've always dreamed of every car coming equipped not only with a first-aid kit, but with two foldable bicycles in the boot." But, he said, Germany is unfortunately far from having such a creative industry.

What is his view on discussions about e-scooters in Germany? After all, in recent weeks many critics have warned of an increased danger of accidents. "We are wondering about how to keep scooters under control," he said, shaking his head. "Instead, we should be discussing car speed limits."

Monheim left on his folding bike. He was going to make his way to Bonn's central train station and from there he would take the train to Trier.

Von Braunmühl, of Tier, drew a comparison with Scandinavia and the Netherlands, where changes in traffic policy were initiated decades ago. "In Germany issues are discussed longer and more thoroughly," he said.

And what will Germans say in 20 years? Will they laugh when they think back to discussions about the electric scooter? "They will," he said, "at least be bewildered by the big fuss that accompanied the introduction of the scooters."