German football clubs have condemned the actions of some Borussia Dortmund fans after they attacked visiting RB Leipzig fans, including children. Hundreds of hardcore BVB fans threw bottles and spat on the visitors. 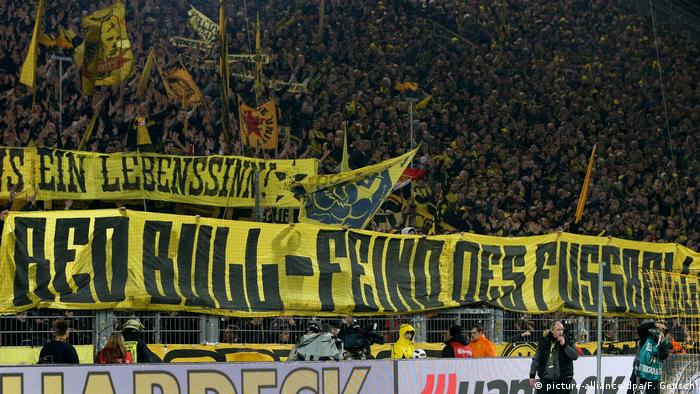 "In the build-up to the match, in the Strobelallee area, RB Leipzig supporters were bombarded with stones and cans from Borussia Dortmund fans," police said in a statement.

Leading up to the match, between 350 to 400 hardcore "Ultra" Dortmund fans gathered in an attempt to stop RB Leipzig's team bus from reaching the stadium. Police and BVB were able to redirect the bus, but the group then turned their attention to arriving Leipzig fans.

"The violence was then directed against any recognizable Leipzig supporter - regardless of whether they were children, women or families," Dortmund police said in a statement.

The group of Dortmund supporters threw "stones, bottles, cans and beer cases" at the Leipzig fans and lit fireworks. Four police officers and a police dog were injured as police attempted to disperse the crowds using pepper spray and batons.

DW's Nick McKenna-Klein was at the stadium on Saturday and saw adults yelling and spitting on young Leipzig fans.

"I have never seen such images, such hate-filled grimaces in any of my police operations - I am shocked," said Dortmund police director Edzard Freyhoff in the statement.

Condemnation and investigation from football clubs

"The attacks of Dortmund fans against opposition spectators and the police, plus insults and offenses against women and children, are not acceptable and are embarrassing for the whole of football in Germany," said the club.

Borussia Dortmund replied on Sunday, condemning the violence and saying the club "deeply regretted the riots." They also wished the injured Leipzig fans a quick recovery and said they would work with police.

"We can assure you that BVB will be putting everything in place in order to shed light on the misconduct of our own supporters and to enforce strict punishments accordingly," read the statement.

The German football federation DFB announced that it will also investigate the match. Their investigation, however, will mainly concern various controversial banners on display in the Dortmund stadium's famous south stand, news agency DPA reported.

RB Leipzig, who are backed by energy drink giant Red Bull, are unpopular amongst some German football fans who say the club represents commercialism.

Dortmund fans in the stadium took a particularly hard stance on RB Leipzig, displaying banners with slogans reading: "Whoever loves football, hates RB" or "For the people's sport of football - against those who destroy it."

Do Bayern Munich rely too much on one man? Why can't RB Leipzig beat the big boys? Is Mahmoud Dahoud back on track under Hecking? All this and more in this week's Bundesliga talking points. (04.02.2017)