Donald Trump in Las Vegas after concert shooting: 'Our souls are stricken with grief'

President Donald Trump traveled to Las Vegas to meet with victims, family members and police after the worst gun massacre in modern US history. The gunman's girlfriend says she didn't know the shooting would happen. 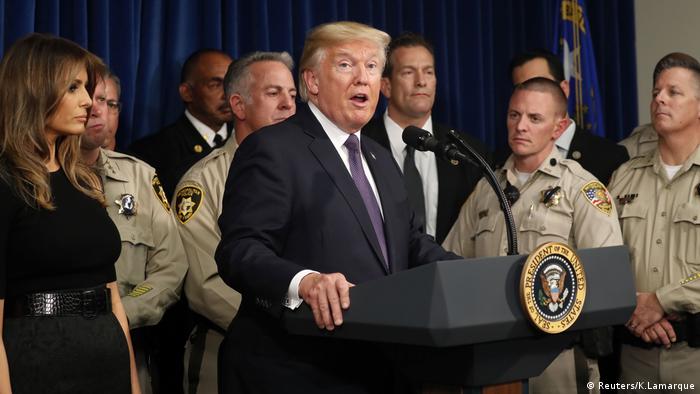 US President Donald Trump traveled to Las Vegas on Wednesday to meet with police officials and survivors of Sunday evening's shooting spree, which left 59 people dead and injured 527 more.

"Our souls are stricken with grief for every American who lost a husband or a wife, a mother or a father, a son or a daughter," Trump said at the Metropolitan Police headquarters. "We know that your sorrow feels endless. We stand together to help you carry your pain.

"We will struggle through it together," he added. 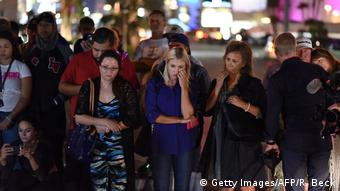 The president and first lady Melania Trump had started their trip meeting with Clark County Sheriff Joseph Lombardo, who is leading the police investigation.

The Trumps then went to the nearby University Medical Center to meet privately with victims, family members, and medical professionals. On their way, he passed the Mandalay Bay hotel from which the gunman, Stephen Craig Paddock, fired for nine minutes from the 32nd floor at a crowd of around 22,000 people attending an open-air country music festival.

Speaking in the lobby of the hospital, Trump said doctors had done "indescribable" work, adding that "it makes you very proud to be an American when you see the job that they've done."

Police are still puzzled as to what drove Paddock, a 64-year-old retired accountant with no criminal record, to commit the worst mass shooting in modern US history. The gunman killed himself as police stormed his hotel suite.

Trump said investigators were "learning a lot more" about Paddock, adding that details would be "announced at an appropriate time."

On Tuesday, Trump had described Paddock as sick and demented. He also tried to console the country, saying "our unity cannot be shattered by evil, our bonds cannot be broken by violence."

Girlfriend says she had no clue about massacre

On Wednesday, Marilou Danley said she had no idea that Paddock was plotting a massacre when he asked her to visit family in the Philippines.

Danley, who was called a "person of interest" by investigators, issued the statement after returning from the Philippines and being interrogated by the Federal Bureau of Investigation.

"I knew Stephen Paddock as a kind, caring, quiet man," Danley said in a statement read by her attorney. "I loved him and hoped for a quiet future together with him.

"He never said anything to me or took any action that I was aware of that I understood in any way to be a warning that something horrible like this was going to happen."

She said she was initially pleased when Paddock wired her $100,000 (€85,000) in the days before the shooting but she later feared it was a way to break up with her.

"It never occurred to me in any way whatsoever that he was planning violence against anyone," Danley said.

Another shooting, another debate

The massacre has renewed debate in the US about the country's gun laws, which tend not to be very restrictive.

Democrats have responded to Sunday's shooting by called for reforms, including a ban on the type of device that Paddock used to markedly increase the firing rate of his semi-automatic weapons.

But Republicans, who control both the House of Representatives and the Senate and have traditionally resisted reform, have disregarded those calls. 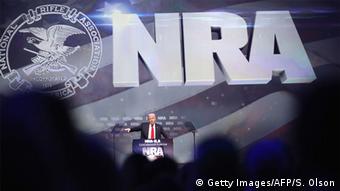 Trump campaigned on protecting gun owners' rights during the 2016 presidential election and has the backing of the National Rifle Association (NRA), a lobby group that spends millions promoting gun rights and supporting politicians opposed to passing gun control laws.

That stance represented a shift in the president's view. In 2000, Trump supported a ban on assault weapons and a waiting period for people who wanted to buy a gun. In 2013, he said background checks should be introduced "to weed out the sickos." Polls show that a majority of Americans are in favor of stricter gun control laws.

On Wednesday, Trump hinted that he may be willing to consider a debate on gun control in the future. Asked about whether now was a good time to discuss measures, he said: "at some point, perhaps, that will come."