Castles are very popular in Germany — but their exact number remains a mystery, as each federal state keeps its own statistics. But a club in Germany wants to put an end to this confusion with a scientific database. 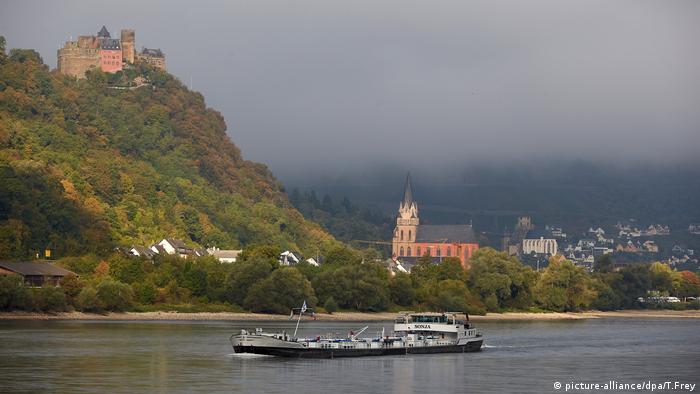 Nobody really knows the answer — at least not yet.

The European Castle Institute wants to put an end to the confusion. The EBI for the study and preservation of castles, the scientific branch of the German Castle Club (DBV), is itself based in Philippsburg Castle — a renovated estate not far from the fortress castle of Marksburg along the river Rhine.

In Braubach, not far from Koblenz, the EBI has started to establish a record of every single castle in the country, information which it is uploading into a public database called EBIDAT. "The well-known castles in Rhineland-Palatinate, North Rhine-Westphalia and the Saarland are already completely recorded," said EBI director Reinhard Friedrich, adding, "Lower Saxony is almost completed too."

Due to tight financing and the limited available personnel, it will take another 10 years to have all the known castles in Germany listed. Estimates put the total number somewhere in the region of 25,000 castles. But Friedrich says there could be a lot more than that.

Medieval castles are popular destinations for sightseeing, for wedding receptions and special events, while also serving as great sites for restaurants and hotels. For most, castles have a romantic association; it's the place where one's favorite children's fairytale was set.

Control of castles in Germany is led separately by each of the 16 federal states, each one keeping its own digital statistics. DBV honorary president Alexander Prince zu Sayn Wittgenstein-Sayn said about the EBIDAT databank: "The advantage is that right from the start, we focused on recording castles in all of Germany, making it conceptually better than the local records."

EBI director Friedrich admits that several lists of German castles have already been published on the internet. But he cautions that, while they are often produced with a lot of passion, these lists often lack a scientific methodology. In the case of EBIDAT, experts compile a record of technical details on each castle, ranging from location, age, type, function, history of ownership, building material, and ground plan.

The biggest castle index in the world

All details are scrutinized by the EBI team of historians and archaeologists at Philippsburg Castle on the Rhine. "We check all records on a castle, and our approach means information is standardized," explained historian Jens Friedhoff, who is working on the project.

Their work is helped by their location at Philippsburg Castle, which is also the repository of a unique library of more than 25,000 volumes about every known castle or palace in Europe, one of the most extensive of its kind in the world. That means historians can access the collection of castle and palace building plans, the collection of graphics, photographs and post cards, videos and CDs.

Not all castles being entered into EBIDAT are still standing. Numerous castles on the database have long since disappeared, with only literature and sources proving that they once existed. One example, according to Friedrich, is Worringen Castle near Cologne, which was destroyed during a battle in 1288. These days even its exact location is no longer known.

In fact, only perhaps 20 percent of the castles in Germany still have a roof on them, according to the EBI director. Another 40 percent are in a state of ruin, while the remaining ones often exist only as "ground-level monuments" in which only the foundations — if even those — are still evident.

"The upkeep was often too expensive, therefore many castles were abandoned or auctioned off for demolition," explained historian Friedhoff.

For the EBIDAT database, "In Hesse we only have six counties left to cover. We are also planning to visit Bavaria, Baden-Württemberg, Saxony-Anhalt and Thuringia," said EBI director Friedrich. It is, however, expensive work. He says "between € 2,000 and € 5,000 is needed for each district." Money for the project comes from private foundations, but mainly from the European Union.

Castle directory in the making

In the meantime, castles from eight other countries have been entered into EBIDAT, namely the Netherlands, Austria, Hungary, the Czech Republic, Latvia, Finland and Slovakia.

Honorary President Sayn-Wittgenstein-Sayn refers to it as "the leading European database on castles." The online database, according to Friedrich, currently offers detailed descriptions of some 5,000 castle listings which are linked to the Google Earth software, allowing a bird's eye view of these fortresses.

In 2018, a castle encyclopedia is to be integrated into the database, allowing users to reference specific terminology.