Does Apple′s new data policy prove it has too much power? | Business | Economy and finance news from a German perspective | DW | 30.04.2021

Does Apple's new data policy prove it has too much power? 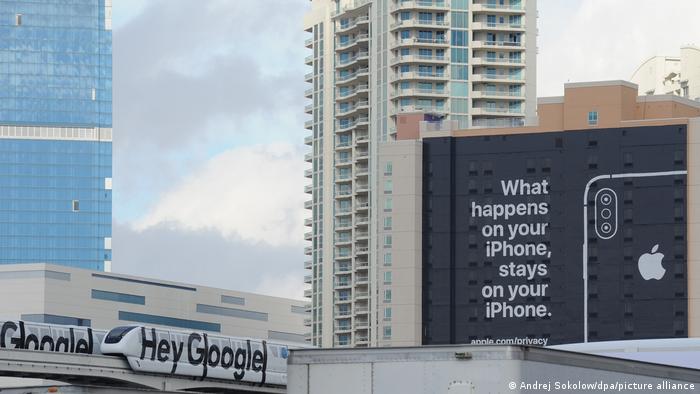 Apple has long emphasized its stance on privacy in its adverts

Following a delay meant to give companies time to adapt, Apple has finally rolled out a long-awaited data privacy update. After Apple users install iOS 14.5, the latest software update, they will begin receiving push notifications asking them to decide whether to allow apps and websites to track their activity.

Data privacy advocates are lauding the decision, but the move is a worst-case scenario for advertisers and tech companies whose business models rely on generous access to user data.

The new policy does much to enhance Apple CEO Tim Cook's image as a data privacy steward. Under Cook, Apple has increasingly put data privacy at the heart of its mission. Since 2019, under the motto "Privacy. That's iPhone," the company has explicitly leveraged data protection as a unique selling point of its products.

Meanwhile, marketers have been leaning more towards the motto "data is the new oil." The phrase, en vogue over the last decade, draws a comparison between the mountains of data our devices generate and the prized natural resource that drastically changed the course of history, making a few billionaires along the way.

Ad-based business models have kept many apps free and made it possible to provide users with advertising targeted to their interests. But many users feel data tracking is a breach of privacy, one they don't want or expect from tech companies and advertisers. Making it easy for over 1.5 billion iOS users to turn off the data faucet will upend revenue streams for all sorts of companies that currently rely on targeted advertising in some shape or form.

Many players benefit from tracking, selling, or buying user data. From mobile app businesses and websites to data brokers and advertising companies to multinational conglomerates and the mom-and-pop shop down the road, user data can make a big difference to their bottom line. That's a lot of data sharing.

"What is so particularly troubling about this is that most people are not aware of this happening," data expert Frederike Kaltheuner told DW. Those tracking include Google, Amazon, Microsoft and other household names, but also a range of companies most people have never heard of, she adds.

The crucial legal question is not "specifically privacy-related," the Zentralverband der deutschen Werbewirtschaft (ZAW) — the umbrella association of the German advertising and communication industry — said in a statement sent to DW. "This is the narrative being pushed by Apple. Factually and legally, this is misleading."

A key point of contention is that, under the new policy, Apple is not applying the push notification to its own apps, while it does to third parties, the complainants say.

"The mechanism imposed on Apple's competitors as such is one-sided and gives Apple tangible economic and strategic advantages, while at the same time putting companies on the platform at a comprehensive disadvantage," says ZAW. "Given the overwhelming market position Apple occupies as gatekeeper, this is abusive."

Across the ocean, the associations have a powerful ally: Facebook. Almost all of the social media giant's revenue comes from ad targeting and relies on access to user data. Over 200 million small businesses advertise on its platform, according to company figures. This has allowed one of the most valuable companies in the world to cast itself as a crusader for small businesses in the fight against Apple.

"Free, ad-supported services have been essential to the growth and vitality of the internet, but Apple is trying to rewrite the rules in a way that benefits them and holds back everyone else," a Facebook spokeswoman told the NYT, responding to the new policy.

Facebook CEO and founder Mark Zuckerberg has become something of a foil to Apple's Cook in recent years. While the latter has been increasingly vocal about the importance of data privacy, the former has stuck to the principle that harnessing the power of data is a good thing.

If that were the case, Facebook and Co. wouldn't be as worried. Presented with the push notification, people would be choosing to opt in. Initial research from AppsFlyer, however, suggests that 74% of users are likely to opt out of having their data tracked.

"What I find quite sinister," says Kaltheuner, "is Facebook's attempts to paint this as, 'What Apple is doing is bad for business.'"

European data protection law already required apps to get consent to track users' data, she says. But enforcement has been slow and lacking and non-compliance is widespread.

"Basically, what Apple is doing is just making compliance easier for apps."

The concern is real. In an investor call on Wednesday, Facebook warned that growth rates in the second half of the year could "significantly" decline due to the iOS 14.5 update. Market regulators have never achieved such a reaction, despite repeated threats of financial penalties.

A win for privacy, a loss for the market

Many are applauding Apple for standing up for data privacy. A new vision of the digital future appears to be taking shape, one that doesn't have to involve ever-present surveillance. It's easy to write off the opposition's protests as sour grapes. But the implications of a market where one company has so much sway is still a cause for alarm.

"The fact is: With (this new policy), Apple is setting up its own one-sided regime that is decoupled from the data protection law that governs all companies," says ZAW.  "According to all of this, competitors who need permission anyway under data protection law, especially user consent, are consistently hindered by (the policy) while Apple simultaneously favors itself throughout, which will ultimately also be to the detriment of consumers and media diversity."

"It's really important to remember that that's a lot of power in the hands of a company — where leaders aren't democratically elected," Kaltheuner says. "As a CEO of a publicly traded company, you have to act in the interest of the shareholders. That's part of your job."

The data expert envisions a future where humans can trust that the devices and services they use will do exactly what they state and that personal data is shared with informed consent and without coercion.

"These are all things that should be a given," she says. "I just want them to work and be worthy of my trust."