Diplomacy continues amid EU aid for Ukraine | Europe| News and current affairs from around the continent | DW | 14.05.2014

The EU has provided Ukraine with its first financial aid package, funds for Kyiv's energy bills and political reforms. The search for a diplomatic solution, meanwhile, continues with plans for round-table talks. 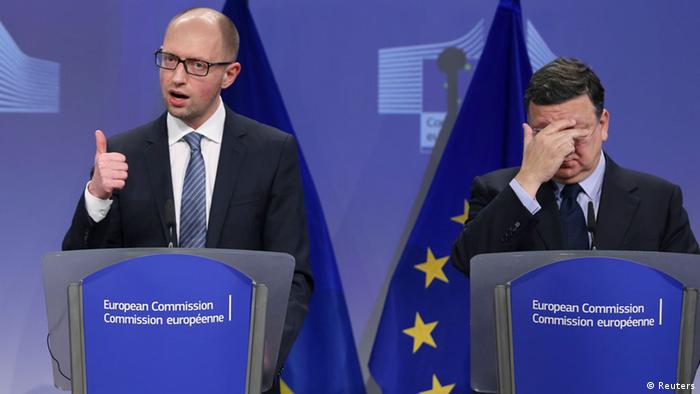 On Tuesday morning (13.05.2014), acting Ukrainian Prime Minister Arseniy Yatsenyuk met with German Foreign Minister Frank-Walter Steinmeier in Kyiv before jetting off to Brussels for a two-hour meeting at the European Commission. At a joint press conference following the talks, Yatsenyuk seemed calm but strained. Asked whether his government will participate in a round-table discussion held by the Organization for Security and Cooperation in Europe (OSCE), the prime minister was evasive.

The talks, to be mediated by top German diplomat Wolfgang Ischinger, are expected to start on Wednesday (14.05.2014) in the Ukrainian capital. The OSCE, with the support of the European Union, wants to bring the Ukrainian government and representatives of the breakaway regions in the country's east to the same table.

Speaking in Brussels, Yatsenyuk said that Ukraine has been conducting a "national dialogue" with the goal of constitutional reform for two months already. Commenting on the OSCE's efforts, Yatsenyuk only noted briefly: "This is to be a Ukrainian-led and a Ukrainian-owned process."

No concessions from Ukraine

Shortly before, the Russian foreign ministry had demanded that Ukraine's pro-Russia regions in the east be given more rights and that separatists be invited to the round-table, according to news agencies. Yatsenyuk did not respond to Russia's demands, instead blaming Moscow for the unstable situation in his country. 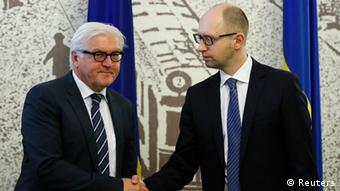 Yatsenyuk (right) met with Steinmeier early in the day

With a slightly mocking undertone, Yatsenyuk pointed out that "it seems Russia is already engaged in supporting Russian-led protesters and terrorists. We urge Russia to condemn them, to urge all these so-called protesters…to leave and vacate the buildings and to do everything they can to stabilize the situation in Ukraine."

The prime minister, whose legitimacy is disputed by Moscow, resolutely addressed the Russian leadership: "Russia will fail to make Ukraine a failed state."

Previously, the Ukrainian government had declared in writing that it would sit down for Wednesday's talks with anyone willing to pursue legitimate political goals through legal means. On Sunday (11.05.2014), the eastern regions of Donetsk and Luhansk held independence referendums that weren't recognized by the government in Kyiv, or the European Union.

After the talks between Yatsenyuk and EU Commission President Jose Manuel Barroso, EU diplomats took it as a "small sign of hope" that Russia had not yet recognized the breakaway regions. After a similar vote in March, Ukraine's Crimean peninsula officially became Russian territory in a matter of days.

Barroso called on Russia to work toward stability in Ukraine, as had been promised at the Geneva conference in April. He added that Russia must "repeal the mandate of the Federation Council to use force on Ukrainian soil and act as a responsible stakeholder of our community of nations."

On Monday (12.05.2014), the EU slightly expanded its sanctions against Russia, threatening more and tougher economic measures in the event that Russia interferes in the Ukrainian presidential election on May 25.

"It's not good for the future of Russia to have his kind of confrontation with the European Union. The European Union is by far the most important economic partner of Russia, in trade and investment," said Barroso. 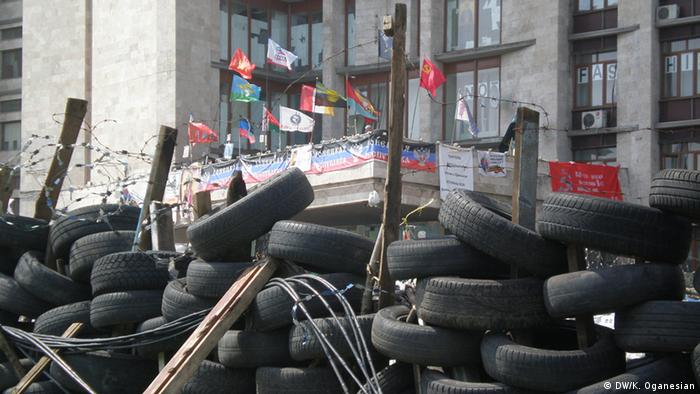 With barricades still in place in Donetsk, safe and fair elections will be difficult

He did not want to speculate on Russian President Vladimir Putin's motives, but he said he knew the man in the Kremlin well, having met him at least 20 times in his 10 years as president of the commission. But EU diplomats are beginning to doubt whether Russia can be swayed by economic sanctions, saying that Putin is concerned more with power and influence rather than his country's economic prosperity.

Barroso called on Putin to engage in trilateral talks with Ukraine and the EU on gas prices and the security of the energy supply from Russia. Yatsenyuk has threatened Russian gas giant Gazprom with legal action if the company refuses to negotiate fair market prices for its deliveries.

Yatsenyuk also demanded the return of companies and assets in Crimea which Russia seized through its annexation of the territory in March. The prime minister accused Russia of robbing Ukraine of its gas fields on land and offshore, and vowed to take Moscow to court.

Ukraine's government, in dire economic straits, on Tuesday signed two financing agreements with the European Commission. Some 350 million euros ($479.5 million) have been earmarked to establish an effective administration, while 600 million euros will be paid in the next few days, the first installment of a 1.6-billion-euro loan intended to bridge acute budget gaps, according to Barroso. 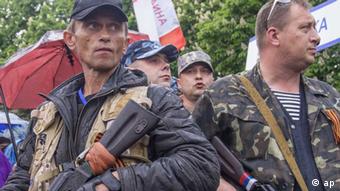 Yatsenyuk admitted that some hot spots could hinder voting

Barroso and Yatsenyuk agreed that the presidential elections scheduled for May 25 must take place as planned. Yatsenyuk said this would be possible in almost all regions of the country, except for the city of Slovyansk, currently under the control of rebels, and some areas of eastern Ukraine.

"We still maintain stability in southern Ukraine, despite the fact that Russia tried desperately to trigger [actions there]," said the prime minister. "[But] we do acknowledge that there will be some hot spots where it will be difficult to hold free and fair elections."

Yatsenyuk made his statement before news broke that six Ukrainian soldiers had been shot and killed outside the eastern Ukrainian town of Kramatorsk on Tuesday. Whether and how the Ukrainian government will be able to ensure the safety of international election observers and volunteers on May 25 remains unclear.

Kyiv caught between a rock and a hard place

The EU has imposed new sanctions in reaction to violence and a sham referendum in eastern Ukraine, but a solution to the Ukraine crisis may be on the horizon, says DW's Ingo Mannteufel. It's now up to Kyiv. (13.05.2014)

A large majority voted for independence in eastern Ukraine, at least according to the separatists. But Moscow has recognized the results, just to complicate Ukraine's presidential election, says analyst Liana Fix. (13.05.2014)