Donetsk separatists ask to join Russia | World| Breaking news and perspectives from around the globe | DW | 12.05.2014

Within hours of the result of a dubious referendum, the leader of the self-declared "Donetsk People's Republic" requested to join Russia. But whether Putin accepts the overture is another matter. 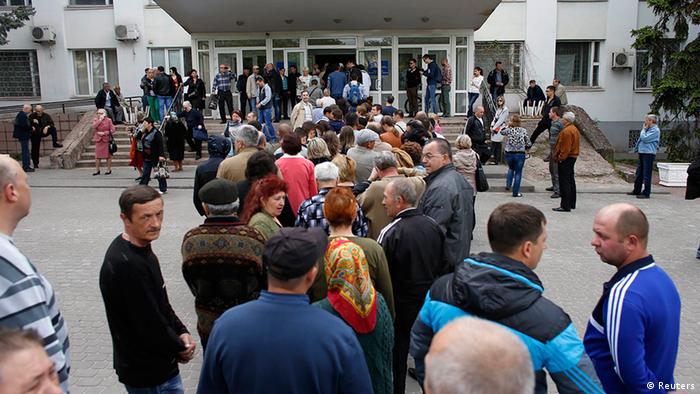 Just two hours after the final tally of the so-called referendum was declared, the self-proclaimed leader of the Donetsk People's Republic said he had requested to join Russia. In a news conference in his office on the top floor of the occupied city hall, Denis Pushilin told reporters that the Donetsk People's Republic would become a sovereign state with immediate effect. 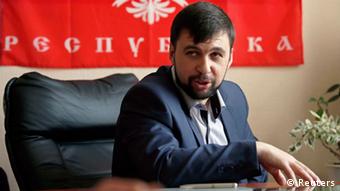 Pushilin announced his ambitions as soon as the vote was tallied

The Ukrainian Prime Minister's office in Kyiv had no immediate reaction to Pushilin's declaration, while a spokesman for the Kyiv-appointed regional governor, Sergei Taruta, also refused to comment. The government in Kyiv earlier described the poll as a "farce."

Serhiy Garmash, head of a pro-Ukrainian group based in Donetsk, dismissed the vote as well. "The referendum does not have any legal force and was held solely for the purpose of providing the separatists with additional arguments in their negotiations with Kyiv and Moscow," he said.

But the separatist leadership in the neighboring Luhansk region said the poll was valid. "The turnout was the biggest since 1992," said Virali Vasiliy, a spokesman for the self-proclaimed Luhansk governor. "This is proof of the mood of the people." Luhansk separatists also declared independence in their region following the announcement in Donetsk, but they denied reports of a second referendum on joining Russia.

The vote has been widely criticized by Kyiv and the international community, largely because it was run by the same people who wanted the outcome to go in their favor. The pro-Russia movement initiated the referendum, organized it, and their staff manned the polling stations and counted the ballots. There were no independent observers. 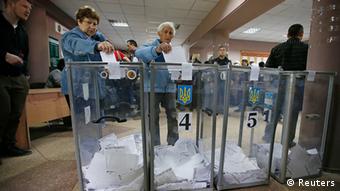 The Ukraine government condemned the vote as a 'farce'

The separatist-run Election Commission which set up the poll declared a turnout of 75 percent, but the government in Kyiv disputes this, saying the figure was around 24 to 32 percent. The vote seemed orderly in Donetsk, but in areas where they didn't control government buildings, separatists were forced to set up improvised polling booths on the street. There were reports of irregularities in many areas. At the polling station in Dokuchayevsk, south of Donetsk, people who were not on the electoral roll were able to vote simply by showing a passport.

Most voters attending the referendum appeared to vote "yes," but many were not sure what they were voting for. The hastily photocopied ballot asked just one question - "Do you support the Act of Independence of the People's Republic of Donetsk?" Some said they supported the referendum because they did not approve of the government in Kyiv, others because they wanted to be closer to Russia. But the pro-Russia movement has taken the "yes" vote as a signal to re-orientate the country towards Moscow. Whether the Kremlin offers them membership of the Russian Federation remains unclear. Only a last week, President Vladimir Putin had asked the separatists to postpone their poll. They may not be able to count on him backing the result.

The only solution to the dispute between Moscow and the West is a neutral Ukraine, argues Clifford Gaddy. The Russia expert at the Brookings Institution spoke to DW. (13.05.2014)

Opinion: No half measures

So far, the threat of comprehensive sanctions has frightened Brussels more than Moscow. They're the only way to impress Putin, says DW's Christoph Hasselbach. (12.05.2014)

A day after the unrecognized referendum in eastern Ukraine, EU foreign ministers, meeting in Brussels, are poised to impose new sanctions on Russia. They are also asking themselves if there is anyone left to mediate. (12.05.2014)