The only solution to the dispute between Moscow and the West is a neutral Ukraine, argues Clifford Gaddy. The Russia expert at the Brookings Institution spoke to DW. 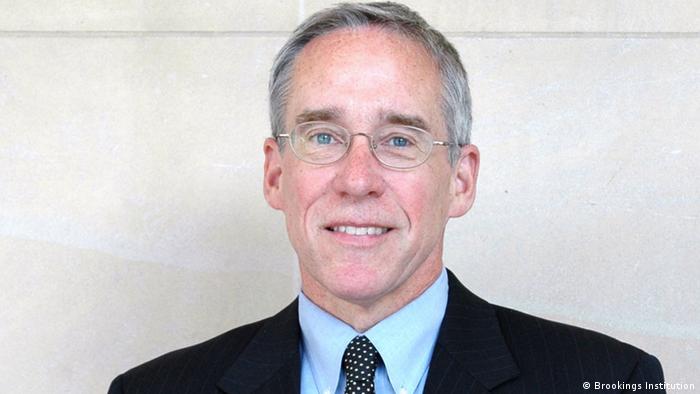 The EU has just expanded its sanctions against Russia after Sunday's referendum (11.05.2014) in eastern Ukraine. What are the next steps for the United States? Will there be more sanctions in the run up to the Ukrainian election on May 25? Or is there still room for a negotiated agreement?

What both the United States and the EU will do prior to the elections is they will repeat their threat of stronger sanctions if Russia is to interfere with the elections. Basically what's very important for the United States: The US administration is looking pretty desperately to get out of this stand-off with Russia, but they need to do it in a way that will save face.

What could such a face-saving solution look like for the US and the EU?

They want to get Russia to the negotiating table, they want to arrive at some kind of a "Finlandized" Ukraine, that is a Ukraine that is territorially intact except for Crimea, that is nominally an independent and sovereign country but that is in fact neutral. That is it certainly would not have any association with NATO.

But they need to package that as a victory for the West and of course therefore portray it as some kind of a concession on the part of Putin. This is all public relations because in fact that's exactly what Putin wants and that's his ultimate goal. His preferred goal is essentially a Ukraine that is not a platform for any sort of operations against Russia and that Russia would have pretty strong control over.

Have the sanctions not had any effect on Russia at all?

The sanctions have caused pain. Do they have an impact on the Russian economy? Absolutely they do. Stronger sanctions would cause more pain. Are they effective in changing Russia's goals, strategy, and strategic behavior? No, they are completely ineffectual. And stronger sanctions won't do it either.

Why is it that the Russians seem to be so resistant to economic pressure?

They can endure more pain than we possibly can dole out to them and more pain than these sanctions will cause us because they will. It's Russian history, it's Russian culture, it's the Russian psychology. There is basically a cult of suffering that is part of the national narrative, the national identity. Nobody has ever forced Russians to their knees and accept being submissive to an outside power. They will fight to the last man.

Clifford Gaddy is an economist and Russia expert at the renowned Brookings Institution in Washington.