The interim government in Ukraine has said that only groups with "legitimate political goals" and "no blood on their hands" can be invited to national unity talks. Germany's foreign minister has now moved on to Odessa. 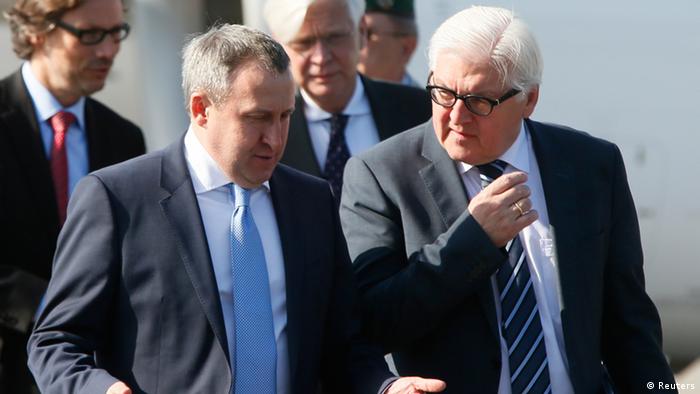 Ukraine's government on Tuesday announced a first set of "round table for national unity" talks, but said that leaders from the breakaway regions of Donetsk and Luhansk would not be welcome. The interim authorities were reacting to an appeal from visiting German Foreign Minister Frank-Walter Steinmeier.

Steinmeier voiced cautious optimism that the first round of talks could take place on Wednesday. After visiting Kyiv, he moved on to Odessa, where at least 48 people were killed on May 2 - Ukraine's worst day of violence since the ouster of former President Viktor Yanukovych.

Steinmeier had hoped to lay a wreath at the trade union building, which was torched with separatist protesters inside, but was told this could spark further unrest. "We understand that the people are still full of outrage and sadness," Steinmeier said, but added that this "tragedy" had the potential to lead to a "change of path in all of Ukraine."

Even during the German-led diplomatic push in Ukraine, fighting continued to the east of the country on Tuesday. Ukraine's defense ministry said six servicemen were ambushed and killed and another eight injured outside the town of Kramatorsk. Kramatorsk is in Donetsk province, where separatist leader Denis Pushilin on Monday appealed for accession to the Russian Federation.

Russia criticized the interim government's "unwillingness" to engage the eastern breakaway leaders, who in turn say they seized power because they don't recognize the new national government. Presidential candidate Yulia Tymoshenko also criticized the planned talks, saying the western capital of Kyiv was too far removed from Ukraine's latest upheaval.

"The capital city is 800 kilometers (498 miles) away from the epicenter of these political tremors," Tymoshenko said.

Steinmeier's visit is part of a roadmap from the Organization for Security and Cooperation in Europe (OSCE) seeking to stabilize Ukraine. The OSCE has also recommended that veteran German diplomat Wolfgang Ischinger moderate the negotiations, along with a former Ukrainian president: either Leonid Kravchuk or Leonid Kuchma.

Interim Prime Minister Arseniy Yatsenyuk left his choice of Ukrainian moderator open after #link:17631268:speaking with Steinmeier on Tuesday, saying only: "We have several ex-presidents. It will be the best one."

Ischinger chairs the annual Munich Security Conference in Germany. He was formerly a career diplomat and one of longstanding German Foreign Minister Hans-Dietrich Genscher's closest colleagues.

Ukraine is currently scheduled to elect a new president on May 25, but it's unclear whether all regions will participate, or if some groups might seek to disrupt the polling.

"National dialogue" is of the utmost importance for Ukraine's stability, German Foreign Minister Steinmeier has said. The diplomat traveled to Kyiv to help find a way to defuse a potentially explosive crisis. (13.05.2014)