′Dhaka′s inaction emboldening Islamists to attack bloggers′ | Asia | An in-depth look at news from across the continent | DW | 07.04.2016

Bangladeshi bloggers and activists have demanded justice for Nazimuddin Samad, a secular campaigner killed on Wednesday. A fellow activist believes the government must take proper steps to rein in religious extremism. 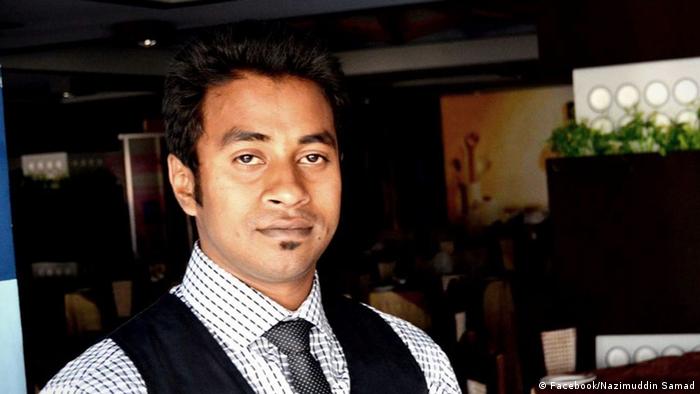 Nazimuddin Samad was known for criticizing Islamic fundamentalism on social media. In his last Facebook post before his death, he warned that public senitiment had been growing against the Bangladeshi government following the recent deaths of secular activists in the Muslim-majority country.

The motive behind Samad's murder is not yet clear. However, Samad's childhood friend and fellow activist, Golam Rabby Chowdhury, thinks that Islamist extremists might be involved.

DW: What can you tell us about Nazimuddin Samad's activism?

Golam Rabby Chowdhury: Samad was my childhood friend. We went to the same school and even attended the same college. He was a secular person and was involved with Gonojagoron Moncho, a group of activists who demand maximum punishment for Islamists involved in war crimes during the 1971 War of Independence.

Samad was against all kinds of religious fundamentalism. He often criticized religious extremism on social media. He was also involved in street protests against social injustices in the country.

The killers shouted 'Allahu Akbar' (God is great) while attacking Samad with machetes. Does this provide a clue as to who might be behind the killing?

At the moment, I am very shocked and can't say for sure why Samad was murdered. What I know is that he vehemently opposed religious fundamentalism and feared that he could be attacked by Islamists. Because of these threats, his family had requested him to stay away from online activism. But he had told me a while back that he would soon resume his activities, as he wanted to make his voice heard.

Do you see a connection between Samad's murder and the recent killings of secular Bangladeshi activists by Islamists?

There must be a link because Samad actively took part in many protests against rising intolerance and extremism in Bangladesh. He had demanded capital punishment for war criminals and slammed politicians for using religion to achieve political goals. These could be reasons why he was killed, and I believe his murder was very much related to his activism.

Has the government made steps to stop such incidents?

The Bangladeshi government has not done much to stop these killings, which I find very shocking and discouraging. Therefore, the killings of humanist and secular writers and activists have been increasing in the country. Unfortunately, the government's inaction is emboldening Islamists to attack bloggers.

Last year, activist Ananta Bijoy Das was hacked to death in Sylhet and his murderers are still at large. Now they have slain Samad. The government must take proper steps to rein in religious fundamentalism in Bangladesh.