Bangladeshi court keeps Islam as state religion | Asia | An in-depth look at news from across the continent | DW | 29.03.2016

Bangladesh’s top court has rejected a 28-year-old petition to remove Islam as official religion of the country. While the South Asian nation's Islamists rejoice, analysts say the move is a setback for secular forces. 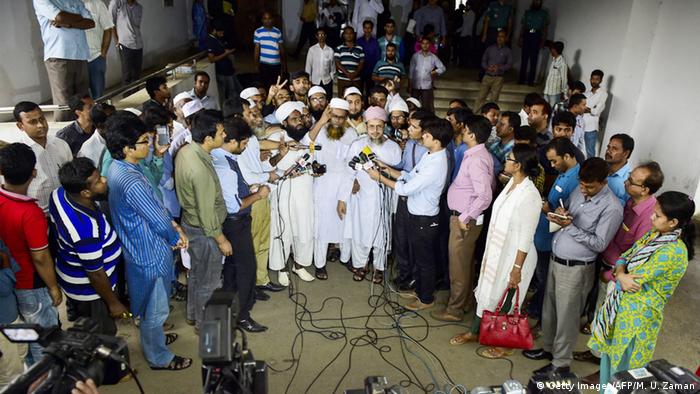 Islam was introduced as state religion in the Bangladeshi constitution in 1988, almost two decades after the South Asian nation got independence from Pakistan following a liberation war. The inclusion of Islam was against the core principles of the country's independence fighters. The move prompted a group of 15 prominent citizens to file a petition in the courts.

In 2011, the Bangladeshi Supreme Court asked the government to explain why the amendment to the constitution, which made Islam state religion, should not be declared illegal. However, the same court took only two minutes on Monday, March 27, to reject the petition, ruling that the citizens who filed the petition in 1988 should have first taken up the issue with government officials.

Murad Reza, the government's lawyer for the case, praised the court's decision. "Islam stands as Bangladesh's official religion as the court scrapped the petition," he told reporters after Monday's verdict.

However, Arifur Rahman, a prominent blogger and human rights activist, said the people failed to understand why the court had rejected the petition.

"The court has actually 'not' ruled against the subject of the petition," he said. "This means that the hearing of the actual content of the petition - the clause 2A of the Bangladeshi constitution introducing Islam as state religion - did not take place."

"In the future, a properly submitted petition will be heard in the court and the Bangladeshi constitution will be relieved of this theocratic burden," he added.

Last week, Hefajat-e-Islam, a radical Islamist group in the Muslim-majority country, warned of an armed struggle against the government if it tried to scrap the state religion. Another religious group observed a countrywide strike on the day of the hearing. Some members of the Islamist groups, who gathered outside the court on Monday, celebrated "victory" after the court struck down the petition.

Fazlul Karim Kashemy, a Hefajat-e-Islam leader, thanked the court ''on behalf of the nation'' for rejecting the petition. ''Muslims and non-Muslims in our society have been maintaining a good relationship for long," he said, justifying his party's stance against a secular state identity.

But Arifur Rahman does not think that the Islamists' protests influenced the court's decision. "The petitioner group is no longer functional, so the court is justified to reject the petition," he underlined.

'State shouldn't have a religion'

Parimal Nathwani, an Indian politician and member of parliament, questioned how Bangladesh could have Islam as state religion when the government believes in secularism.

Frustrated by the court's decision, Subrata Chowdhury, the lawyer for the group of petitioners, said the court did not even allow them a proper hearing. He said he would decide on an appeal after consulting with the ten members of the group who are still alive.