Bangladesh ignores Islamic State′s threat | Asia| An in-depth look at news from across the continent | DW | 27.11.2015

The so-called "Islamic State" claims to have established a "security cell" in Bangladesh to conduct attacks on foreigners and police in the country. The government of the Muslim-majority country rejects the claim. 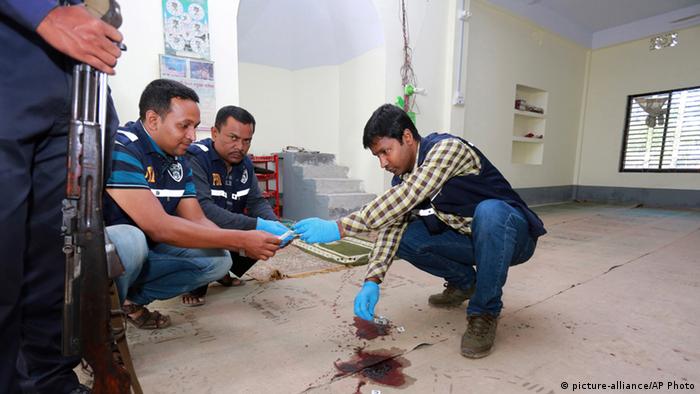 The "Islamic State" (IS) online propaganda magazine "Dabiq" has published a five-page report on Bangladesh detailing its plan for expansion in the South Asian nation. It has referred to the country as 'Bengal.'

The report again claims responsibility for the recent killing of foreigners in the country. Italian aid worker Cesare Tavella was killed in the Bangladeshi capital Dhaka's highly secured diplomatic zone on September 28 this year. Within one week, Japanese national Kunio Hoshi was shot dead in Rangpur, a district in the northern part of the country.

Another Italian citizen, a doctor working as a missionary, Piero Parolari, was shot at close distance on November 18. He survived the attack with head injuries. Meanwhile, Shia mosques have been attacked leading to bloodshed. IS declared all these attacks to be "successes" and the work of their militants in the country.

The Bangladesh government has, however, again dismissed IS' claims. Home Minister Asaduzzaman Khan Kamal told DW that the country had no IS operatives.

"Some extremists released on bail from jail are issuing threats of different types. This does not need to be taken seriously," he said. "Our law-enforcing agencies are prepared to face any attacks."

Bangladesh police have arrested some IS suspects in the past. Four of them had been indicted by a Dhaka court recently for "conspiring to topple the ruling government through subversive activities and to establish a so-called Caliphate state in Bangladesh," according to local media.

Nur Khan, a terrorism expert and researcher based in Dhaka, said, "the IS magazine has described the killing of foreigners as ‘targeted killings."

"The foreigners were followed before the attacks were carried out. The group claims it has a security cell that conducts the attacks," he says. "Now, I do not understand why the government does not acknowledge their presence."

In an interview with DW, Siegfried O. Wolf, Director of Research at the Brussels-based South Asia Democratic Forum (SADF), said that the government of the country was trying to deal with the growing IS threat, but not openly.

Referring to the death sentences handed to Islamist leaders by Dhaka-based International Crimes Tribunal (ICT) for war crimes committed during the 1971 war of independence, he said, "the ban on some Islamist groups and the ICT sentences are part of these attempts. But a lot more needs to be done to make sure that the country doesn't become a ground for global jihadist movements."

"The government must openly admit that IS exists in the country and adopt a comprehensive counterterrorism approach to deal with the threat," he continued.

Islamists eye for a 'Caliphate state' in Bangladesh

The English-language magazine Dabiq is considered as the official online magazine of IS that propagates the terror group's activities. The report on Bangladesh published in its latest edition criticized the main Islamic party in the country, Jamaat-e-Islami, along with other political parties.

It has declared Motiur Rahman Nizami, the top leader of the party who has been sentenced to death for war crimes, to be a "Murtad" meaning apostate. Three leaders of the party have already been hanged for war crimes and more are likely to suffer the same fate.

IS has distanced itself from Jamaat by declaring the party’s activities to be "un-Islamic" in the report. Rather, it aims to establish a Caliphate state with the help of its own followers. Human rights expert Nur Khan views this as alarming and a much more radical approach than Jamaat.

Khan has been monitoring the Islamists' terrorist activities in Bangladesh for a long time. He thinks that the present unstable political situation in the country is helping Islamists to gain ground.

"When the room for democratic activity is being narrowed, free speech is being blocked, press freedom is being curbed, the opportunities for militancy increases," he says.

On November 26, the European Parliament expressed its concern about the growing restrictions on freedom of expression in Bangladesh which have accompanied the rise of religious fundamentalism, intolerance and extremist violence in the country. It urged the authorities to restore the full independence of the media. But it appears unlikely - given the present atmosphere in the country - that anybody is listening.

An Italian doctor has been wounded in Bangladesh. Daylight shooting victim is the third foreigner to be targeted in recent weeks as country struggles with extremist violence targeting secular voices and foreigners. (18.11.2015)

While international efforts are focused on subduing the "Islamic State" threat in the Middle East, experts warn that a potential peril could emerge from Asian jihadist groups, who feel emboldened by IS' "success." (17.11.2015)