Internet users defy Facebook ban in Bangladesh | Asia | An in-depth look at news from across the continent | DW | 20.11.2015

Bangladesh has blocked Facebook and some mobile messaging apps for an indefinite period, citing security reasons. However, some Internet users have bypassed the ban, raising doubts about the effectiveness of such action. 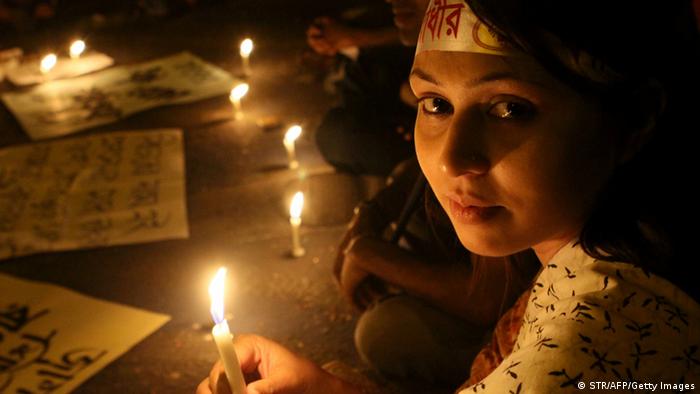 Bangladeshi authorities have blocked Facebook, Messenger, Viber, WhatsApp, Line and Tango after the country’s highest court upheld death penalties on November 18 against two top opposition leaders for crimes committed during the country's 1971 war of independence. Similar rulings have triggered deadly protests in the past.

Prime Minister Sheikh Hasina hinted at the move a week ago, citing security reasons. Confirming the ban, Sarowar Alam, an official of the nation's Internet regulatory authority BTRC said, "The government has decided to suspend the operation of six social networking platforms."

There was also no Internet connection in Bangladesh for more than an hour on Wednesday when the ban was implemented, according to Dyn Research site. BTRC blames a "misunderstanding" for the Internet blackout as the government directives only asked to block some specific services. However, a good number of Internet users in the country showed up on Facebook - once the Internet was restored - and posted comments informing people on how to bypass the government's ban on the social media network.

Arif R. Rahman, one of the most popular Facebook users in Bangladesh with more than 250,000 followers, wrote on the network that he had ignored the ban by using a Proxy server that showed his online location somewhere in Papua New Guinea, while he was actually in Dhaka.

Sumon Ahmed Sabir, an online security expert based in Dhaka told DW that, "Technically, it's impossible to completely block anything on the Internet. There are hundreds of back doors available to access blocked content."

He said it's quite natural for some tech-savvy people to find ways to use Facebook or make calls via Viber or Tango, even though they are currently blocked in Bangladesh. "But the apps remain blocked to a large number of Internet users who don't know how to bypass the ban," Sabir added.

But perhaps more surprising is the fact that Zunaid Ahmed Palak, Bangladesh's State Minister for Information and Communication Technology, posted a picture on his official Facebook profile on Thursday from an event in Dhaka, despite the ban being in place. The country's ruling party's official Facebook page has also been updated a couple of times in the past two days.

How effective are such bans?

In recent months, Bangladesh has seen a number of attacks on secularist bloggers, publishers and foreign nationals carried out by suspected religious fundamentalists. Four atheist bloggers have been killed for their writings criticizing Islam. A few days ago, "Islamic State" claimed responsibility for the killing of two foreigners in the country. Given these developments, blocking Facebook and some apps won't help improve the security situation, say online security experts.

Almas Zaman, a cyber-security expert who has worked with the police, told DW he thought blocking Facebook and other apps "is a completely poor solution to address security concerns."

"Anyone can access those online services with a Proxy or Virtual Private Network (VPN) installed even on their phones," he wrote from Dhaka.

But Zaman also pointed out that Bangladesh doesn't have an effective online surveillance system. There is also a lack of skilled manpower in the regulatory authorities. As a result, online surveillance has remained as a huge challenge for the country, he said.

"A firewall on the Internet Gateway can be an effective way of monitoring the online activities of suspected terrorists, and can ensure control in smart way," Zaman added.

Sumon Ahmed Sabir, on the other hand, thinks the government needs to put more emphasis on its offline initiatives to curb terrorism. He said, "They must look for the root causes that motivate a large number of people to get involved in the wrong activities."

Bangladesh blocked Facebook and YouTube for a week in June 2010 after a group of people uploaded controversial images that hurt the religious sentiments of the Muslims. Earlier this year, the authorities banned some mobile apps including Viber and WhatsApp for four days, also citing security reasons.

Bangladeshi authorities have been accused of blocking media advertisements, curbing press freedom in the process. Two of the country's leading newspapers have reportedly suffered a massive loss in advertising revenue. (30.10.2015)

Many people have been arrested in Bangladesh recently for expressing their opinions on Facebook. Those arrests were made under a new law, which bloggers consider as an attempt to curb free speech in the country. (06.10.2015)