A Bangladeshi law student who wrote against religious extremism on Facebook has been shot dead in Dhaka. A secular group called the student a "loud voice against any social injustice." 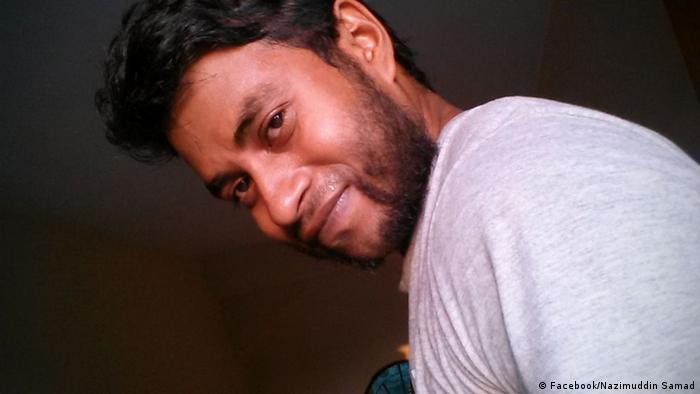 Bangladeshi law student Nazimuddin Samad was attacked with a machete and then shot in the head, Dhaka Metropolitan Police confirmed on Thursday.

At least three men riding on a single motorbike carried out the killing on Wednesday night. No group immediately claimed responsibility for murdering the 28-year-old Jagannath University graduate student.

'Attacker shouted Allahu Akbar while attacking me with a machete'

A culture of impunity in Bangladesh is to be blamed for continued attacks on bloggers and freethinkers in the country, says a secular publisher who survived a slash-and-kill attack recently. (04.12.2015)

"Assailants hacked Nazimuddin Samad's head with a machete on Wednesday night. As he fell down, one of them shot him with a pistol from close range. He died on the spot," Dhaka Metropolitan Police Deputy Commissioner Syed Nurul Islam told the AFP news agency.

Police said the assailants appeared to have been tracking Samad ahead of the attack. Samad had only recently arrived in Dhaka from the northeastern city of Sylhet to study law. Samad had been on a hit list of 84 atheist bloggers.

Imran Sarker, who heads a leading Bangladeshi online secular activist group, said Samad had written against radical Islam and in favor of secularism and also had joined nationwide protests in 2013 calling for capital punishment for leaders accused of atrocities during the 1971 war of independence.

"He was a secular online activist and a loud voice against any social injustice. He was against Islamic fundamentalism," said Sarker, head of the Bangladesh Bloggers Association.

The "Dhaka Tribune" reported that the assailants shouted "Allahu akbar" (Arabic for "God is great") during the attack, which took place on a busy road near Jagannath University.

The killing follows a string of similar attacks last year, when at least five secular bloggers and publishers were murdered, allegedly by militants. Police arrested members of the banned Ansarullah Bangla Team, but have yet to prosecute them.