Two students have been sentenced to death over the first in a series of murders targeting atheist writers. The Dhaka court imposed jail terms on six other accused. Blogger Ahmed Rajib Haider was killed in early 2013. 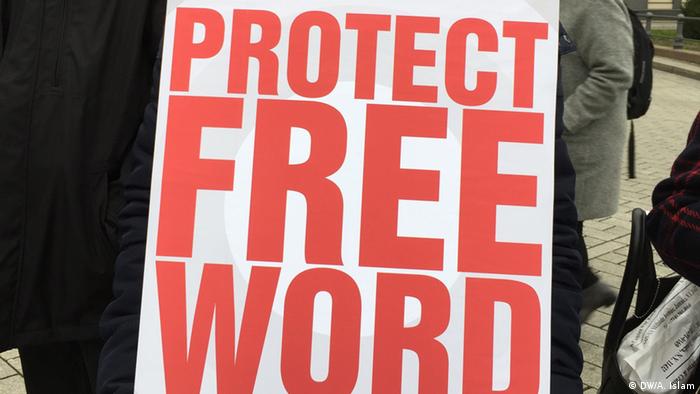 The murder of secular blogger Ahmed Rajib Haider nearly three years ago culminated on Thursday in death sentences against two young men alleged to have been radicalized by local Islamists.

Haider, an architect, was targeted after he helped run protests against the leaders of an Islamist party. He was 35.

Bangladesh, a Muslim-majority nation, classifies Islam as its state religion but has also preserved a secularism clause in its constitution. However, it has, and enforces, strict blasphemy laws. These advocate jail time for "deliberate" or "malicious" attempts at "hurting religious sentiments."

In 2015 alone, at least four more bloggers and a publisher were murdered while others went into hiding, or fled abroad, prompting widespread calls for protection.

One of the run

A third man Maksudul Hasan, 23, was given a life-long sentence.

AFP quoted prosecutor Mahbubur Rahman as saying that Rana had been a fugitive since the trial began.

Rahman said a firebrand cleric Jashim Uddin Rahmani had already been given a five-year jail term for abetting the murder by preaching against bloggers.

Police said Haider had angered the students by writing against Islam and said a banned group Ansarullah Bangla Team (ABT) had been behind the attacks.

Mahbubul Hoque Shakil, a close aide to Prime Minister Sheikh Hasina, told the Associated Press in November that authorities were taking "all measures" to protect bloggers and investigate killings.

"We have arrested many suspects. No stones will remain unturned," Shakil said.

"We believe an atheist has his freedom to speak with his own logic but without an ill-planned motivation of hurting religious beliefs," he added.

The first attacks in 2015 came in February when American-Bangladeshi blogger and writer Avijit Roy was hacked to death on the campus of Dhaka University.

His wife, Rafida Ahmed, survived the attack but with injuries.

On 14 December, the Bangladesh government lifted a ban on social media usage which was imposed in anticipation of protests over death penalties for two opposition leaders.

Salauddin Quader Chowdhury and Ali Ahsan Mohammad Mojaheed were hanged in late November - after losing appeals - on charges related to atrocities commited during Bangladesh's war of independence in 1971.