Destination Donbass: Shots in no-man′s-land | Europe| News and current affairs from around the continent | DW | 13.12.2016

'Here are your passports. Now turn around and go back!' There's no disputing the order by the soldier from the self-proclaimed Donetsk People's Republic. The end of a work trip? Christian Trippe reports from Kurakhove. 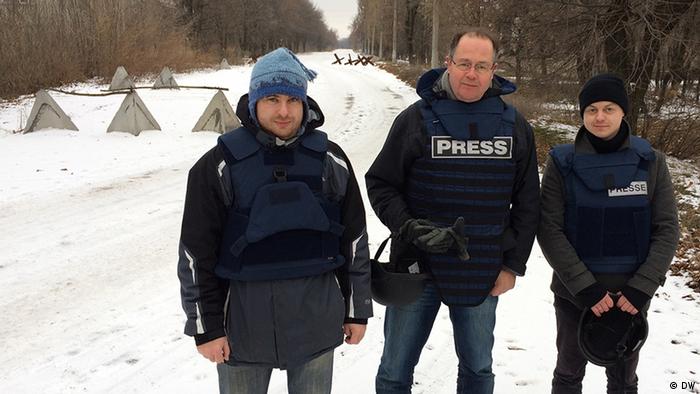 In October, the German chancellor and the French president made their last attempt at opening the door for a peaceful solution to the crisis in the contested regions of Eastern Ukraine when they met with the presidents of Russia and Ukraine in Berlin. The meeting was called in order to push for a concerted effort to finally implement the so-called "Minsk II" agreement. The accord contains a number of points that are designed to reintegrate the Donbass region into Ukraine. But for that to happen, the fighting must finally stop. Only then can regional elections be held, an amnesty for separatist fighters be instated and the planned special status of the predominantly Russian-speaking region be granted.

That is the political background information that we were given at DW's Kyiv studios on Monday evening, and what led us (pictured above) to travel to the Donetzk People's Republic (DPR) checkpoint at Marinka. A cold wind cuts through the night. White SUVs from the Organization for Security and Co-operation in Europe (OSCE) are lined up at the checkpoint. Currently, the OSCE has about 800 observers operating in Eastern Ukraine, positioned between Ukrainian government forces and pro-Russian mercenaries: they record every infraction against the ceasefire. It is less than 25 kilometers (15.5 miles) to Donetsk, the separatists' capital. 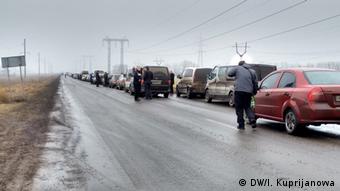 Swiss diplomat Alexander Hug, deputy chief monitor of the OSCE Monitoring Mission to Ukraine, is sitting in one of the SUVs. He wants to see for himself whether the team can finally proceed. We want to accompany Hug on his inspection. Yet, it is not to be. We have written permission from the DPR press office, we have an appointment for an interview with the speaker of the separatist militia, and not least, we are here because the OSCE has invited us. None of that impresses the grumpy man in the uniform. His Russian camouflage is brand new, he is not wearing a name tag, nor is he wearing the black, blue and red insignia of the separatists. He tells us that the intelligence service of the Donetsk People's Republic has denied us access. "You should be happy you can even leave," he threatens. That is the language of despotism.

The crossing between the areas controlled by separatists and those controlled by Ukraine closes at 5:00 pm. Now it is shortly after 6:00 and our trek through no man's land is a journey into the unknown. Signs reading "Danger! Mines!" are posted to the left and right of the road. Now and again one can see the flash of far-off artillery fire to the South. A few vehicles are stopped a hundred meters away from the first Ukrainian checkpoint. The drivers are hunched behind their steering wheels, covered up with blankets. They failed to reach the checkpoint before it closed. Some take the risk of sleeping in the war zone in the freezing Ukrainian night to be among the first to be let through in the morning, thus avoiding endless lines in order to travel into Ukraine - from within Ukraine. The border, which isn't officially a border, has seen much building activity over the last several months. Controls on the Ukrainian side have also become somewhat of a vexation.

Warning shots as we roll on 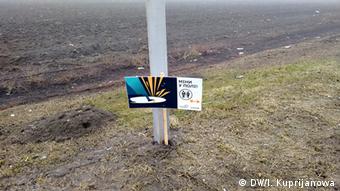 We don't want to spend the night in our car, stuck in no man's land. It is five below zero outside (23˚F). The driver refuses to let the motor run - and thus the heater - because it will keep us from being able to hear what is going on around us. Mykola Berndnyk, a DW studio producer and the trip's organizer, makes phone calls - with Ukrainian armed forces staff, with the OSCE, with border services in Kyiv and with important local agencies. Then, finally, after an hour of this: The Ukrainians open the border for us to pass. We approach the control post at an idle. Suddenly there is gunfire, shots ring from an AK-47 just ahead. Warning shots. Two soldiers approach our vehicle, one says: "We have to clear a couple of mines before you can proceed." The other apologizes for the gunshots.

Then we are allowed through and manage to find night's lodging in a village behind the demarcation line. It is far enough away from the front that we don't have to hear shooting all night. OSCE diplomat Hug complains to DW-Kyiv (via e-mail) that movement along the demarcation line is generally limited. "The OSCE wants to emphasize that we need simpler rules controlling border passage." That goes for journalists as well.

Residents of the town of Avdiivka, near Donetsk, are skeptical about the new ceasefire in eastern Ukraine that began on Thursday. Shortly after going into effect, it was broken at least twice. (15.09.2016)