German Foreign Minister Frank-Walter Steinmeier said much work is still "urgently needed" to get a ceasefire implemented. No one can be satisfied with the poor implementation of the current ceasefire deal, he added. 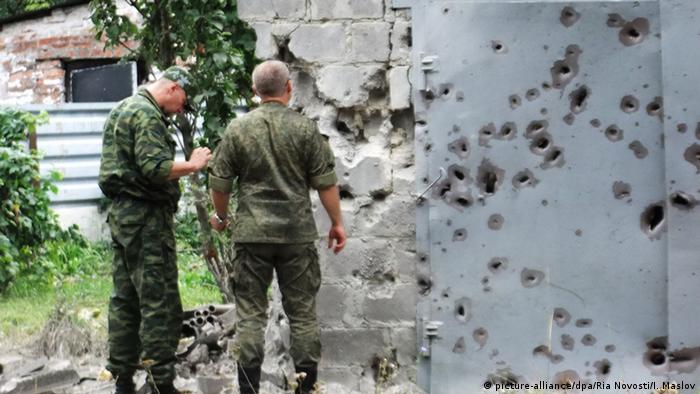 Two years after a ceasefire was supposed bring peace to eastern Ukraine a low grade war continues between the Ukrainian army and Russian-backed separatist rebels - much to the dismay of the government in Kyiv and its Western allies.

In Berlin, German Foreign Minister Frank-Walter Steinmeier said on Thursday that much work is still "urgently needed" to get a ceasefire implemented.

Steinmeier will visit Ukraine next week in an effort to arrange a new high-level meeting of representatives from Germany, France, Ukraine and Russia. He reiterated his frustration with the slow progress in resolving the conflict that has killed more than 9,500 people.

"I think everyone involved ... isn't and can't be satisfied with the implementation of the Minsk agreement," Steinmeier told reporters, referring to a peace accord brokered by leaders of the countries in the Belarusian capital in September 2014.

"We have experienced long periods of standstill and when progress has been made, it has been in millimeters. None of us... can allow or see any benefit in standing on the spot when it comes to implementing the agreement," he said after meeting Ukrainian Foreign Minister Pavlo Klimkin.'

Meanwhile, US Defense Secretary Ash Carter has appointed a former US Army general to be a special adviser to Ukraine's defense minister.

John Abizaid is being tasked with advising Kyiv's defense chief Stepan Poltorak in the areas of strengthening democratic civilian control of the military, tackling corruption and undertaking other reforms.

Aid continues as before

But the US assistance does not include plans to arm the Ukrainian army with offensive weapons or to support them in offensive military operations.

"It continues in the same vein" of defensive-oriented military assistance, Carter said, after meeting with his Ukrainian counterpart on the sidelines of a peacekeeping conference in London.

On the ground, fighting in the Donetsk and Luhansk regions - also known as the Donbass - has left people weary, with little hope the conflict will end any time soon.

The fighting broke out in April 2014, shortly after Ukraine's Russia-friendly President Viktor Yanukovych fled to Russia when masses took to the streets demanding his ouster. That, and Russia's annexation of the Crimean peninsula, triggered the military conflict.

The fighting soon intensified with the arrival of a large number of troops and heavy weaponry, chiefly believed to be Russian supplies.

The Minsk Protocol of September 2014 called for an end to the fighting, and it was signed by Ukraine, Russia and rebel representatives. But the agreement frayed quickly, necessitating a new round of negotiations - this time including France and Germany.

Despite the ongoing carnage, and the weariness of those inflicting it, there's little expectation the fighting will actually stop anytime soon.