Ukrainian Foreign Minister Pavlo Klimkin joined DW in Berlin to discuss the situation in the Ukraine, where violence has recently escalated. Klimkin is in town for a meeting of OSCE members called by Germany. 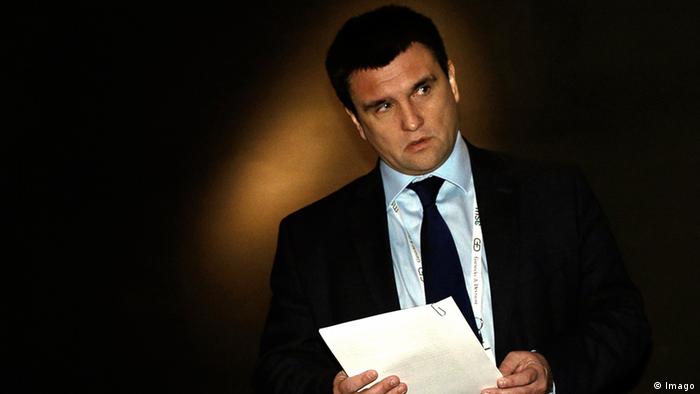 DW: How much is Ukraine willing to compromise to make the ceasefire agreement work?

Ukrainian Foreign Minister Pavlo Klimkin: Compromise is a point of terminology, for me it is a point of substance. If the Russians prolong this or deliver on the Minsk Agreements. The Minsk Agreements are, in essence, a kind of peace plan. If you like to go towards peace, what do you do normally? You stop shooting. You let the OSCE (Organization for Security an Cooperation in Europe) control the territory, you let the OSCE control the pulling out of forces, you let the OSCE control the part of border where we have been getting the whole inflow of weapons, of Russian regular troops, and you start talking about free and fair elections. How do you make free and fair elections happen in Donbass?

The Kremlin says it has very limited influence in the Donbass over the Ukrainian separatists.

Talks in Berlin on the situation in eastern Ukraine have brought proposals for improving security but no breakthrough on a political process. There is no agreement yet on holding local elections. (11.05.2016)

The Ukrainian president is sticking to the course he's been steering toward the EU, yet some critics blame him for the results of a Dutch referendum in which a majority of voters rejected the EU-Ukraine accord. (07.04.2016)

With the Minsk peace accord more than a year old, France and Germany say little has been done to implement it. Although violence has wound down, social and economic reforms remain neglected, Berlin says. (03.03.2016)

Look, it is a joke. There are no people who are independent from Russia. Militarily, the whole situation there stirred from Rostov, from Russia, by Russian militaries and who is in charge there is Russian special forces and Russian special agencies. It's even in the sense of currency - the Russians have injected more Russian rubels undermining Donbass.

There are informal talks going on right now, here in Germany, is there a way the channels can be opened to talk to the Russians? For the Ukrainians and the Russians to talk these things out behind the scenes?

We have to stick to Minsk and we have to stick to the Normandy format, the Germans and the French who have been acting with a clear mandate by the European Union. But here you see Russia clearly playing for time. Not trying to deliver on everything, but simply waiting for more destabilization in Ukraine and actively trying to destabilize. Waiting for future elections here in Europe, somehow believing that it would also destabilize the situation here and maybe playing for US elections to come. We need Russia to deliver on Minsk. Because of that, sanctions are important, solidarity is important and political pressure is very important.

What is autonomy? If you have Russia fully controlling the situation in Donbass, and if we give autonomy like the Russians believe is the way forward, it is a way towards federalization, toward weakening and fragmenting Ukraine. It is just about legitimizing the Russian protectorate now in Donbass and after that the Russian strategy is to push this protectorate back into Ukraine as a kind of Trojan horse.

What's the Ukrainian strategy then?

The Ukrainian strategy is to deliver on Minsk, and it is easy if you are ready to deliver on Minsk: Stop shelling, give control for the situation to the OSCE, the special monitoring mission, and allow the the armed OSCE police mission to control the situation, get Russian weapons out of Donbass and start preparing for free and fair elections

Do you think the separatists will go along with that?

One disconcerting development is the announcement by Ukrainian President Petro Poroshenko that he is preparing or willing to introduce martial law and a new way of military mobilization. Do you think that would further escalate the situation?

The president clearly said that if the situation is going to worsen substantially, there could be consideration about introducing martial law and about introducing other measures. So far, we need to fully commit ourselves to a ceasefire, and pressuring Russia to deliver on Minsk.