Indian PM Modi said his country would uphold its commitment to the Paris climate agreement during his meeting with French President Macron. After Washington's withdrawal, India's support becomes crucial for the deal. 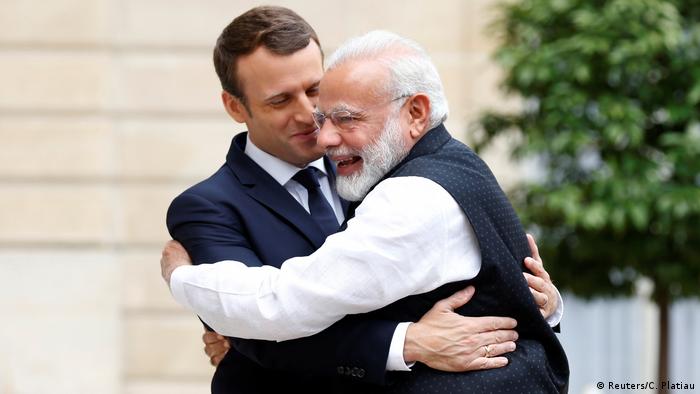 Indian Prime Minister Narendra Modi's arrival in Paris on Saturday came just days after US President Donald Trump retracted his country's earlier commitment to the 2015 Paris climate accord, leaving the future of the international agreement in jeopardy.

India would go "above and beyond" the Paris agreement, Modi said following the meeting with French President Emmanuel Macron.

"The protection of the environment and the mother planet is an article of faith," Modi said.

Macron said he would visit India by the end of 2017 for a solar power summit. France has expressed its intent to cooperate more with India on renewable energy.

Modi's visit also comes at a time when the European Union is facing a turbulent time following Britain's decision to exit the 28-nation bloc.

But in a meeting with German Chancellor Angela Merkel in Berlin earlier this week, Modi stressed that for India "the cohesiveness of the EU is very important."

India's environment minister, Harsh Vardhan, said Friday his country remained committed to the accord regardless of the position of other nations.

"As far as the Paris agreement is concerned … our government is committed irrespective of the stand of anyone, anywhere in the world," Vardhan told reporters in a reference to Trump's withdrawal from the deal.

Modi, whose country is the third-biggest emitter of greenhouse gases in the world, said in Russia on Friday that he would continue to back the deal.

Prior to his visit to Paris, Modi hailed Macron's victory in last month's French presidential election as an opportunity for India and France to boost ties. The two countries signed a strategic partnership agreement in 1998.

"Within a lot of uncertainty and instability where we don't know in which direction the world's great powers are going, it's important to show that the relationship between France and India is stable," a senior French diplomat was quoted as saying ahead of the leaders' meeting by the Reuters news agency.

France and India are also negotiating over nuclear power and renewable energy deals, but these are not expected to be sealed during Modi's current visit.

From BRICS to G7, Narendra Modi seems to be everywhere. The West wants India as a strategic partner, while Russia sees it as an economic ally. DW's Isha Bhatia Sanan asks what India might really want.