There is still time to agree on climate, Russian President Vladimir Putin has said in response to the US pulling out of the Paris accord. The Russian leader also mocked the claims of Russia colluding with Donald Trump. 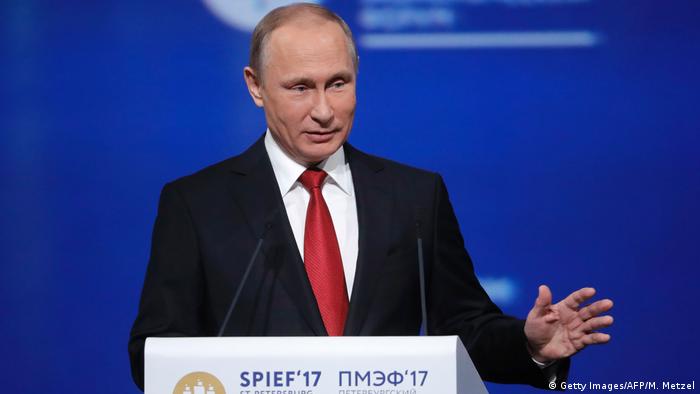 The Kremlin chief praised the Paris accord as a "good" document on Friday, but he added that he did not want to judge US President Trump for pulling out of it.

"It was President Obama who made this decision and it could be that the current president believes it was not completely thought-out or that the needed resources are not there," Russian President Vladimir Putin said at St Petersburg International Economic Forum. "All these issues should be considered, but, from my perspective, it was also possible not to withdraw from it, because they are a framework.

"We still have time to agree on something if we work constructively," Putin said, adding "Don't worry, be happy" in English. The phrase is the title of a 1988 hit by Bobby McFerrin.

Appearing agitated, Putin slammed that the claims as "hysteria" and said they had "nothing concrete, zero."

"I believe it's necessary to stop this useless and harmful babble," he said. "It is the transfer of internal US squabbles into the international arena."

According to the Russian president, politicians backing Hillary Clinton miscalculated the mood during the US campaign. By pointing a finger at Moscow, they avoid to face their mistakes, he added.

"It's easier for them to say that they are not guilty, that the Russians are the guilty ones for interfering in our election," he said. "It reminds me of anti-Semitism. A dumb man who can't do anything would blame the Jews for everything."

The St. Petersburg forum serves as an annual gathering for politicians and businesspeople to promote business opportunities in Russia. Putin said Russian economy entered a new phase of expansion, pointing on the thirds successive quarter of growth.

Commenting on the Western sanctions, he said "entire sectors" of Russian economy were motivated to develop due to restrictions from abroad.

"When it comes to sanctions, it would, of course, be better if didn't have them, and they need to stop," Putin said. However, he also referenced Mark Twain's jab saying that the sanctions cannot be considered fatal.

"When it comes to sanctions, you could say something like 'Rumors of my death have been greatly exaggerated,'" added Putin.

Merkel: 'We have to protect Mother Earth'